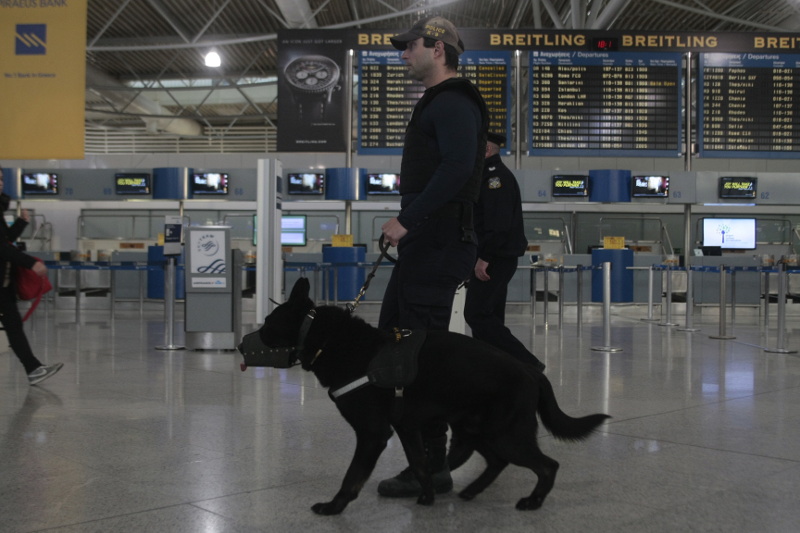 Security at Athens International Airport and Piraeus port, where thousand of refugees are stranded, was beefed up on Tuesday in the wake of the Brussels terrorist attack, although, publicly at least, government officials stated there is no intelligence suggesting that attacks are imminent on Greek soil.

Unofficially, however, Greek police sources said terror alert levels were being raised while security measures are being tightened at foreign targets in the country, such as embassies, diplomatic missions and international companies.

In an interview with Kathimerini last month, the police chief at Athens International Airport, Michalis Sdoukos, revealed that after the Paris attacks last November, an emergency plan had been activated, while drills were conducted to prepare for bomb attacks at the airport’s main terminal.

Yesterday, after a meeting between police, security firms and airline companies, it was decided that additional explosives detection teams will be activated, along with EKAM, the country’s special anti-terrorist unit, at the airport’s departures terminal.

Policing will also be increased in areas where large numbers of people congregate, such as popular archaeological sites in Athens and shopping malls, as well as refugee camps and makeshift areas of worship as there is growing concern that some migrants could become radicalized.

In addition, the extra security measures introduced at metro and ISAP electrical rail stations in response to a series of attacks by vandals last week, will be maintained.

Officials insisted yesterday that there is no evidence to suggest a link between the Brussels bombing and Athens. However, they did confirm reports in the British media that an accomplice of Salah Abdeslam, who was arrested last Friday for his part in the Paris attacks last November, had been registered on the southeastern Aegean island of Leros before he continued his journey to Western Europe.

Along with other Greek political leaders, Prime Minister Alexis Tsipras, who was informed of the attacks while on the phone with Angela Merkel discussing the refugee crisis, expressed “Greece’s solidarity with the Belgian people” and tweeted that “fear, religious hatred and racism must not beat Europe.”

However, yesterday’s events raised some concern in Athens that it could trigger “conservative reflexes” in several EU countries regarding last week’s deal with Turkey to stem the flow of refugees into Greece. Although, officials said, they do not fear the deal will unravel, the Brussels attacks may possibly lead some countries to unilaterally suspend its implementation.