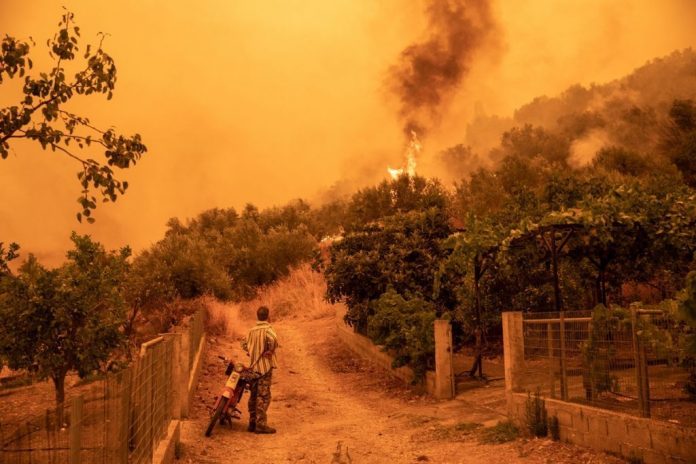 A wildfire is burning out of control at Gortinia, Arcadia region in the Peloponnese, which has led to the evacuation of 12 communities there via the 112 European Emergency Number, the Fire Brigade reported on Tuesday.

Firefighting efforts are hindered by high winds in the area.

The fire rekindled earlier on Tuesday at the areas of Kapelitsi and Livadaki, while two current active fire pockets near the communities of Dafni and Touloubitsi were mentioned by Deputy Minister for Civil Protection & Crisis Management Nikos Hardalias on Tuesday.

Deputy Regional Director of Ilia Vassilis Giannopoulos told Athens-Macedonian News Agency (ANA-MPA) that a fire zone had been placed at the administrative borders of Ilia and Arkadia so the fire from the latter, in Gortinia, does not move into the former. The fire zone was set up with firetrucks and heavy machinery, to protect the areas of Sekoula, Dafnoula and Alifira, he told ANA-MPA. Smaller rekindlings are being taken care of in Lala, Lasdika, Douka and Milies, he added.

Meanwhile, the health centers of Tropea and Dimitsana, as well as the General Panarcadian Hospital of Tripoli and the city’s emergency ambulance service EKAV station have been placed on alert following an order by Health Minister Vassilis Kikilias.