Recent turmoil in emerging markets will hit export-oriented European economies but there are no signs the bloc that shares the single currency is headed towards deflation, German Finance Minister Wolfgang Schaeuble said.

Speaking to Reuters as part of a series of interviews with top policymakers across the eurozone, Schaeuble signaled a readiness to help emerging market countries that have seen their currencies sink to multi-year lows in past weeks as part of a broad market sell-off.

“We will help the emerging markets, within the limits of our possibilities, to solve their problems just as they stood by us in past years,” Schaeuble said, pointing to a meeting of G20 finance ministers in Australia later this month.

“The difficult situation in some emerging markets affects us of course. We are all dependent on exports, Germany more than other countries,” he added.

But Schaeuble, who started his second term as finance minister in December, said he agreed with European Central Bank President Mario Draghi that falling prices were not a danger for the eurozone, despite a drop in the bloc’s inflation rate to 0.7 percent last month and warnings from the International Monetary Fund that deflation is a potential risk.

“There is no deflation danger in Europe,” Schaeuble said. “We understand deflation as a reluctance to spend in the anticipation of falling prices. And there are no signs of this.”

In a wide-ranging interview, Schaeuble also played down the risks of last week’s ruling by Germany’s Constitutional Court on Draghi’s bond-buying scheme.

The court decided to refer complaints against the so-called Outright Monetary Transactions (OMT) program to the European Court of Justice, but it also voiced concerns that the ECB went beyond its mandate with the scheme.

Although the OMT plan has never been used, it is widely credited with restoring confidence in the euro zone after years of crisis that had threatened to tear the 18-member bloc apart.

Some experts, including the head of Germany’s ZEW think tank Clemens Fuest, have said the court decision severely blunts the OMT program.

Schaeuble dismissed those concerns, saying the details of the OMT were secondary to the broad message sent by the ECB and European governments that they would not let the euro zone break apart.

“I think the return of financial market confidence in the stability of the euro has been due not only, not even primarily, to the ECB’s (OMT) announcement,” Schaeuble said.

“When leaders of government on the one hand, and the central bank on the other, say they will do what is necessary, then financial markets need not worry.”

Schaeuble also touched on a referendum in Switzerland at the weekend in which voters approved new limits to immigration from the European Union, saying fears about the free movement of people in Europe needed to be taken seriously.

But he played down the risks of a strong performance by populist, anti-immigration and euroskeptic parties in European Parliament elections in May, saying this would only push bigger mainstream parties to work more closely together.

“If we have stronger euroskeptic voices in the next European Parliament, then it will raise the pressure on everyone else to commit even more strongly to European integration, to react to this result and make Europe more efficient,” he said.

Regardless of the outcome of the vote and despite strong resistance in other European capitals, Schaeuble said Germany would not drop its push for changes to the EU’s Lisbon Treaty that it argues are necessary to ensure closer integration.

“I think we will have a discussion about this at the beginning of the term of the next European Parliament and European Commission, and I am optimistic we will get a solution,” Schaeuble said, predicting progress in 2015. 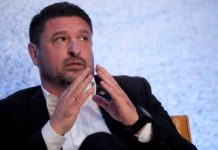