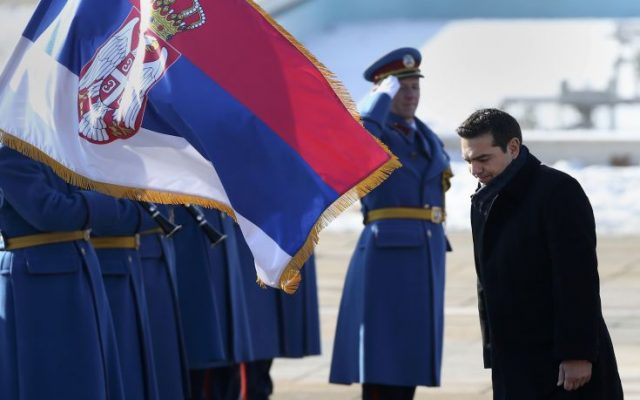 The excellent ties between Greece and Serbia could form a foundation to build “a new architecture for economic cooperation in the Balkans,” Greece’s Prime Minister Alexis Tsipras said on Tuesday, addressing a Serb-Greek business forum in Belgrade.

He outlined his vision for such an architecture, based on “peaceful coexistence and cooperation between peoples and economic actors” that was focused on prosperity and rising living standards and turned the Balkans into a “area of stability and zone of economic growth.”

Tsipras underlined the crucial contribution of Greek and Serbian friendship and cooperation in this direction, noting that the two countries shared common views and values.

“It is extremely important that we can plan together, to have a vision for our countries’ relations and jointly build the Balkan region’s growth,” he added, while also helping establish peace and stability in a troubled region.

“Greece and its business community have always been and will be present in the Balkans…they are and will be present and active in Serbia,” he said, noting the large business delegation that accompanied him to Belgrade. He noted that Greek business people were ready and open for new partnerships and investment schemes on the basis of mutual interests.

The forum, with 70 participants from Greece and 150 from Serbia, was attended by Tsipras and Serb Prime Minister Alexander Vucic.

In earlier statements following his meeting with Vucic, Tsipras noted that the governments of Greece and Serbia want to further strengthen their historic ties. He expressed conviction that his visit would spark a revival in the relations between the two countries, ultimately leading to a strategic partnership.

As a first step in this direction, he announced their decision to set up a Greek-Serbian High-Level Cooperation Council, which will hold its first meeting in Thessaloniki in the spring.

Among potential areas of cooperation, Tsipras listed energy, infrastructure, connectivity, IT and high technology as well as “an extremely important plan for a Belgrade-Thessaloniki rail link,” that connected to a modern rail system extending as far as Piraeus. Another major project that could potentially “change the geography of the Balkans,” he added, was a waterway linking Belgrade and Thessaloniki via the Axios and Morava Rivers. It would be interesting to see whether the EU might finance such a project via the Juncker Plan, Tsipras said.

Greece has the very important strategic advantage of its geographic position and may become a strategic transport hub for Europe, linking this to the Middle East and Asia. On its part, Serbia can become a bridge between western and eastern Europe so our cooperation may be part of a project of great importance for the entire European continent, noted Tsipras.

The Greek prime minister further highlighted the strong cultural and historic ties between the two countries, such as their shared cultural and religious traditions, and said that they often found themselves on the same side, fighting for the same values and ideals, during difficult times in their history.

“Today we are in the midst of a joint effort to bring peace and cooperation in the Balkan region and support Serbia’s efforts to join the EU,” he added.

Vucic noted that economic and trade transactions between the two countries could be improved and that Greece was a top tourism destination for Serbs, while more Greeks were visiting Serbia. He proposed an increase in Serb food exports to Greece and said a faster Thessaloniki-Belgrade rail link was a key issue.

The Greek prime minister had expressed his concern over nationalist and irredentist tendencies in the Balkans and Europe, noting that the rise in nationalist and racist voices affected “those that govern Europe.”

“The Balkans face their own challenges. I expressed my concern about the nationalist, irredentist and intolerant voices. The Balkans’s future cannot be built on the revision of international treaties,” Tsipras underlined. He also called for a mutually acceptable solution to the issue of Kosovo, saying that Greece will steadfastly support its positions on this issue.

Replying to questions about the Former Yugoslav Republic of Macedonia (FYROM), Vucic made it clear that Belgrade has “no desire to solve the problems of others, especially when they don’t ask us to do so.” He thanked Greece for its steadfast refusal to recognise the independence of Kosovo, however, and for its support regarding European measures for the refugee issue.

In his reply, Tsipras noted that both sides have to want a solution in order for a solution to be found. “If one side wants [a solution] and the other doesn’t, no amount of effort by third parties is going to solve any problem,” he added.

He also warned that some European governments, concerned by the rising strength of far-right political forces, had resorted to adopting their political agenda as elections drew near with “disastrous” results. Europe was at a crossroads, Tsipras said, with elections coming up in a number of important countries. He urged all sides to “realise that priority must be given to the collective interests of Europe at a time where there are worrying signs of destabilisation, not the fleeting interests of each country separately.”

“I want to believe that a difficult year for Europe, 2017, will be the year of escape from the quagmire and not a year when the impasse intensifies,” he said.

Lastly, Tsipras expressed Greece’s steadfast support for Serbia’s European perspective and agreed that dialogue on the migration and refugee crisis must be intensified, while thanking Belgrade for its own steadfast positions regarding the Cyprus issue.