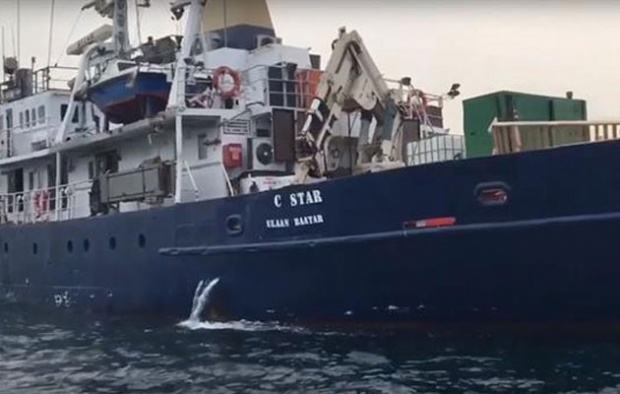 Dozens of Greeks protested in the city of Ierapetra in Crete on Monday night against the possibility of the arrival of a ship chartered by the far-right group, Defend Europe.

According to information from Ierapetra port authority, the group’s chartered ship, the C-Star, is currently sailing in international waters 12 miles south of Koufonisi, a small island in the Cyclades. The group has not yet informed Greek authorities whether they intent to disembark in Crete, but it is believed that Monday’s protests will dissuade them from approaching the port.

Ierapetra mayor Theodosios Kalantzakis said his city is against any form of fascism and doesn’t want to host Defend Europe at the port.

“I do not see any intention by the passengers themselves to come to our region anymore, where we have shown that fascism will not pass, [where] we have shown our solidarity and hospitality to the 700 migrants we helped survive with dignity during the days they were hosted in Ierapetra a while ago,” he said.

“My communication with the authorities and the ministry was immediate and Ierapetra responded with the protests yesterday and also with the message I sent to the particular ship through the authorities,” he added.

The group is sailing in the Mediterranean to protest against the migratory route used by refugees and migrants who seek security in other countries. Defend Europe says it wants to preserve Europe’s identity and stop boats with refugees from reaching Europe.