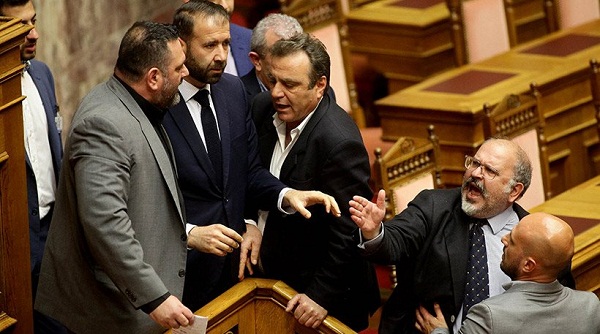 Greek parliament will consider expelling Golden Dawn temporarily from its debates, the body’s head Nikos Voutsis said on Thursday, after a party MP went on a rant attacking SYRIZA MPs as “traitors”, during a speech in the plenum.

Golden Dawn MP Yiannis Lagos, who was speaking about a letter sent by Pan-Macedonian Unions to Greek deputies, started shouting at SYRIZA lawmakers, calling them “swindlers”, “anti-Greek” and “traitors”.

“This hatred, with references to ‘traitors’ and ‘gallows’, shows a strategy aiming at causing tension. To weaken this strategy we must not just marginalize it and exclude it, it should be denounced with a strong voice from the entire political system. Without tactics and false analogies,” he said after the incident.

Voutsis said Lagos will be referred to the parliament’s ethics committee and then the body will discuss on Golden Dawn’s presence in the plenum.