A video showing the Turkish Coast Cuard forcefully pushing migrants to Greece has been posted on Twitter.

The video was shared by the Minister of Immigration and Asylum, Notis Mitarakis, who notes that the clip shows how Turkish Coast Guard pushing migrants to Greece. As Mr. Mitarakis says, this is a violation of International Law and the European Union’s Joint Declaration with Turkey.

The video was filmed by a refugee who was rescued by the Greek authorities. “It is further proof of the instrumentalization of migration flows by Turkey”, says Notis Mitarakis.

As can be seen in the video, the boat in the incident which according to information unfolded in the Aegean, is full of migrants who are shouting desperately during the violent practices of the Turkish Coast Guard officers. The brutality of the Turkish authorities is indeed unprecedented since men are seen beating the migrants with sticks and ropes.

Footage from Turkish coastguard violently pushing forward migrants to Greece, in violation of international law and the EU joint statement. This video was filmed by a refugee who was saved by 🇬🇷. It is further proof of the instrumentalization of migration flows by 🇹🇷 #migration pic.twitter.com/sXG74VxBYo 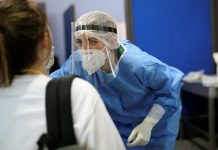