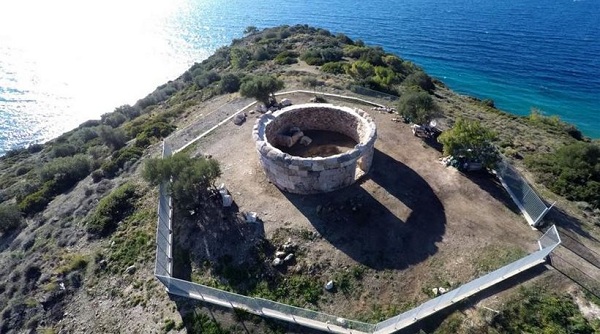 A 4th-century BC circular funerary located in Kolones, at the southernmost cape of Salamis island, has been restored and is opening to visitors, the culture ministry said on Tuesday.

The ancient monument encloses four tombs and a stone pedestal, on which was placed a graves signal, visible even from the sea. The monument had collapsed, for the most part, due to natural causes – vegetation, weather, seismic activity, etc. In the initial restoration study, the monument would have been partly restored by resetting 43 ancient stones in their original location, but during works it was decided to include all of the 99 fallen stones.
Work started in April 2013 and ended in December 2015. The monument will be inaugurated by the general secretary of the ministry, Maria Andreadaki-Vlazaki on November 6, at 12:30.