The country’s largest public sector trade union ADEDY has announce an antifascist protest outside the prison facility of Korydallos on the 7th of May, the day when the long-awaited Golden Dawn trial is set to resume.

In its statement, ADEDY calls unions, anti-racist and antifascist groups to join them in their protest against “the neo-Nazi group which operates under the guise of a ‘political party’ and put an end to their scandalous immunity”.

ADEDY demands that “it is time to condemn those in charge of this criminal gang, the murderers of Pavlos Fyssas and Shehzat Luqman, the employers’ bullies who attacked PAME unionists in Perama, the racists who attacked the Egyptian fishermen and hundreds of migrants, activists, Jews, Roma, homosexuals and disabled people”. 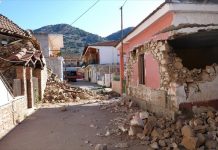 "The European Commission, following the Greek initiative, is working rapidly to adopt a common European framework for vaccination certificates, which we will present in...