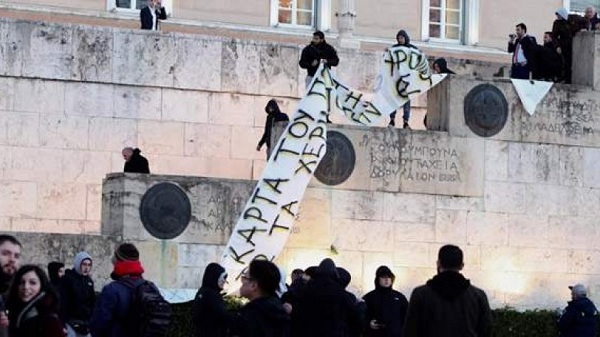 A group of about 20 AEK fans unfurled a banner on the staircase above the Monument to the Unknown Soldier on Syntagma square on Wednesday, in support of the monks living inside Esphigmenou Monastery in Mt. Athos, after a court last week convicted the abbot and a monk to twenty years in prison.

The banner read, among others, “Hands off the Esphigmenou Monastery, Original 21”. Riot police stationed nearby closed in on them and the AEK fans ran off towards Vasilisis Amalias avenue. No arrests or detentions were made.

The court in Thessaloniki found the monk guilty for throwing firebombs at a court bailiff who was trying to evict the monks from a building in Karyes, capital of the Mt. Athos monastic community, in July 2013, while Abbot Methodios was convicted for incitement. Another six monks were sentenced to 10 years as accessories but were freed on appeal.

Esphigmenou Monastery has been involved in a long-standing dispute with the Ecumenical Patriarch whom they accuse of treason for seeking better relations with the Catholic Church.