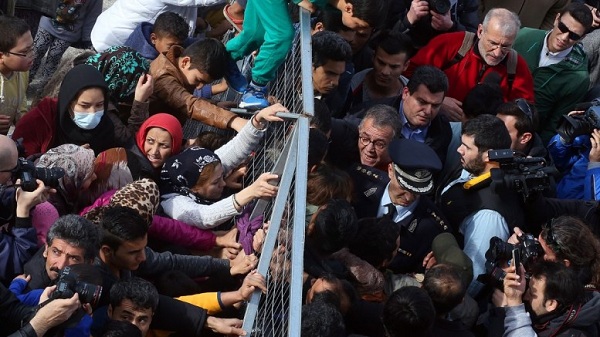 The mayors of Alimos and Glyfada urged Migration Policy Minister Yiannis Mouzalas on Monday not to allow Elliniko’s makeshift refugee camp to become a regular fixture and to find a solution for the people living there, after the tensions caused during the minister’s visit earlier in the day.

Elliniko, the site of the city’s former international airport, is wedged between Alimos and Glyfada, two neighbourhoods in Athens’ southern coast.

“Nobody is interested in the ‘ideological obsessions’ to which Mr. Mouzalas referred to today. On the contrary, we are concerned about finding a realistic, workable solution, with responsibility, plan and a humanitarian face, without further delay,” mayors Andreas Kondylis and Giorgos Papanikolaou said in their joint statement.

They said the transport and settlement of refugees and migrants to Elliniko was “casual, unorganized and without a secure plan on its prospects”, adding that “it is not acceptable to have refugees and migrants crowded in a totally unsuitable area” when hundreds of million euros were granted by the European Union to manage migration.

Kondylis and Papanikolaou also said they never received a response to their letters from the relevant authorities and the prime minister sent in 2016, in which they asked to be briefed on issues concerning public health and safety.