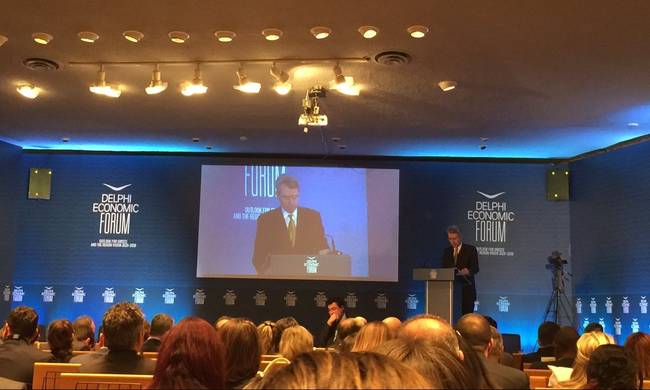 U.S Ambassador to Greece Geoffrey Pyatt on Friday expressed concern about the possibility of an “accident” while praising the Greek government’s responsible attitude at a time of heightened tension, in remarks at the Delphi Economic Forum.

Regarding on the Cyprus issue, meanwhile, he said the new U.S. administration will continue its efforts for a solution.

Turning to economic affairs and the role of the IMF, the ambassador said that he had not observed any change in the attitude of the new U.S. leadership, expressing U.S. support for growth in Greece.

Pyatt also referred to the importance of transatlantic relations, with emphasis on NATO and bilateral ties. “I want to see Greece play an even greater role as a pillar of regional stability,” he added.

“Economic stability and prosperity are important elements of any effort to broaden Greece’s role in this region and in Europe. And, therefore, my number one priority is to sustain the U.S. effort to spur growth and support economic recovery in Greece,” the ambassador said

“As Greece demonstrates its commitment to reform and builds additional trust with its creditors, I am convinced that new investments, both by foreign investors and domestic ones, will buoy the economy and create new jobs,” he added.

Pyatt said that the U.S. government was eager to see U.S. companies expand existing investments and invest in new ventures in Greece.

“One of the things we’re working on this year at the Embassy is a road show and a trade mission planned for June in the United States. We are also engaged with the American pharmaceutical industry and the Greek government to support a healthcare investment initiative,” he said.