US Ambassador to Greece Geoffrey Pyatt on Tuesday said that United States and Greece relations on issues of defense, security, and tackling terrorism are the closest they have ever been, speaking at the 7th Exposec-Defenceworld Conference in Athens on Tuesday.

Pyatt thanked Greece’s defense leadership for the upgrade in the two countries’ cooperation and highlighted that this is the result of the strategic dialogue which was launched by US Secretary of State Mike Pompeo and his Greek counterpart, Minister of Foreign Affairs Giorgos Katrougalos, in Washington in December 2018.

“Greece sits at the nexus of multiple strategic challenges,” Pyatt pointed out, and the upcoming Washington visit of Greece’s defense chief Evangelos Apostolakis will provide an opportunity to not only catch up on recent and developing security challenges but to also establish a flexible response strategy against any and all potential provocations, this via an upgraded defense collaboration between twh two countries, Pyatt elaborated.

The ambassador spoke at length about the facilities in northern Greece’s Thessaloniki and Alexandroupoli, the ports of which were used for deployment of American forces. “Next month, a Stryker Brigade will use the port of Alexandropouli to enter Europe to participate in multilateral, U.S.-led exercises. Looking at a map, you can see why the port of Alexandropouli is a focus of our activities,” Pyatt said.

Speaking of Alexandroupoli in particular, he said the city “has tremendous potential and capacity as well as rail and road networks feeding into Eastern Europe.” He added that from a security and economic standpoint, “it makes sense to further develop the port to benefit both our strategic relationship and the Greek economy. And in this regard, I remain very focused on finding an American investor as that port’s privatization moves forward.”

In addition, the US, he said, has made it a priority to help keep Greece’s military modernized and capable so that it can be a stabilizing force both diplomatically and militarily. “Just as our defense agreements should be updated to address the dynamic regional security environment, our approach towards defense modernization should be revamped as well to address the changing Greek business environment,” Pyatt said, reiterating the importance that the United States places on its alliance with Greece, the capacities of our Greek allies, and the fact that the friendship between Greece and the United States continues to get stronger every day.

“This is a big strategic bet that serves the interests of both of our countries,” he concluded. 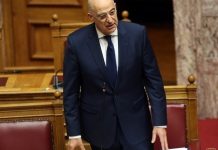