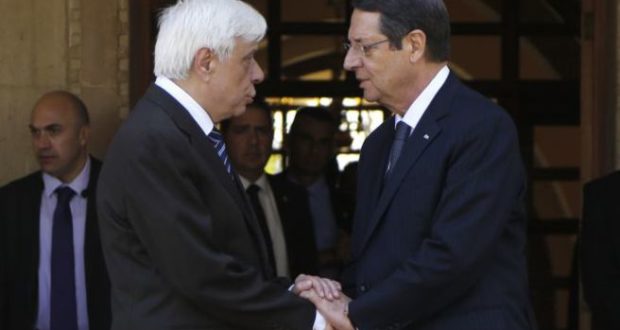 Greek President Prokopios Pavlopoulos and Cyprus President Nicos Anastasiades reiterated their countries common position for a solution without guarantees and Turkish troops on the island during their meeting on Thursday in Nicosia.

Welcoming Pavlopoulos to the presidential mansion, Anastasiades referred to the excellent cooperation with the Greek government which he thanked for its support.

Referring to the negotiations on Cyprus, Pavlopoulos said that there is no pressure but support mostly from the part of the European Union and the European Commission on the positions we have defined and called on everyone to understand that by supporting Cyprus’ sovereignty during the negotiations, they defend the sovereignty of the EU member states.

“Turkey”, said the Greek president “must accept a solution that will allow to Cyprus to proceed in the European Union and to eurozone’s hard core.

Moreover, he called anachronistic and unacceptable the guarantees and the remaining of the Turkish troops on the island noting that they set dangerous precedents.