Turkey ministry of Foreign Affairs directly threatened Cyprus with military action on the ground if the Republic of Cyprus begins drilling for hydrocarbons in November.

“Both Greece and the Greek Cypriot Administration [Republic of Cyprus] are taking steps that increase tensions in the Eastern Mediterranean. The effort to send research vessels into [the area of] our continental shelf in the Mediterranean continues. We respond to these provocations both on the ground and at the [negotiating] table and we never allow a violation of our rights. The Greek Cypriot side announced that it will begin drilling in November. If that occurs, Turkey will continue to give the necessary responses to such provocations in order to protect the rights of the Turkish Cypriots.”

It is at least an oxymoron that a country, which threatens Greece with war if our country exercises its legal rights, which violates our sovereignty and our sovereign rights, as well as those of the Republic of Cyprus, almost daily and which hurls out unacceptable provocative statements and threats, at the same time accuses us of destabilising the Eastern Mediterranean,” diplomatic sources noted on Friday.

“Our country will continue to act with the protection of our national interests and the promotion of security and stability in the wider region as its only yardstick, having as its compass the respect of international law and especially the international law of the sea. We reject in their entirety the baseless Turkish accusations,” the same sources added.

Meanwhile, the Minister of National Defense Nikolaos Panagiotopoulos had a brief meeting with the Minister of Defense of Turkey Mr. Hulusi Akar, on the sidelines of the NATO Defense Ministers’ Summit in Brussels and at the request of his Turkish counterpart.

Papagiotopoulos stressed to his Turkish counterpart that it is useful to maintain open channels of communication between Greece and Turkey, but to take steps in this direction requires improving the climate and adhering to the principles of good neighborliness. 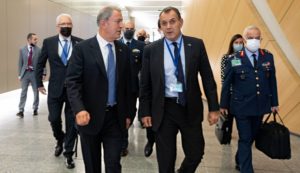