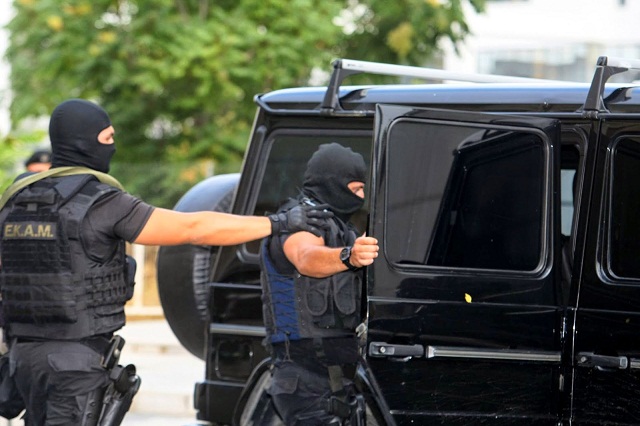 Greece’s anti-terror police arrested on Saturday a 29-year-old man in central Athens who they believe has a central role in the parcel bomb attack against the former prime minister Lucas Papademos and the letter bombs sent to numerous EU officials in March.

The suspect was stopped as he exited an apartment building in Attiki square carrying travel bags and a garbage bag whichcontained two guns, 300 cartridges, eight fake IDs, a plastic box with an explosive device and a timer, two plastic boxes with an unknown explosive material, gunpowder, numerous detonators, cables, timers, batteries and various materials for the construction and a laptop.

The eight IDs each had his picture on them but different names, which leads authorities to believe he may had used them or was planning to use them to rent other apartments, cars or make other transactions.

The seized objects were sent to the crime labs and police are sweeping the apartment he had rented on a fake name and three more they believe are connected with the 29-year-old for more evidence. Police believe the suspect was moving his equipment to another location when he was apprehended.

In March a parcel bomb sent to former German finance minister Wolfgang Schaeuble was intercepted by his office’s mail department, but a separate letter addressed to the International Monetary Fund in Paris exploded, slightly injuring an employee. After the incidents, Greek police intercepted eight more suspect packages at an Athens postal centre.

Papademos was seriously injured in the thigh and torso on May 25 when he opened a letter bomb in his car while two more people also suffered lighter injuries. He was hospitalized for over a month.
The militant group Conspiracy of Fire Cells claimed responsibility for the attack against Schaeuble but not the one against the IMF or Papademos.

The suspect had been under surveillance for an unknown amount of time and police sources say he had been arrested in the past in clashes around Polytechnion.