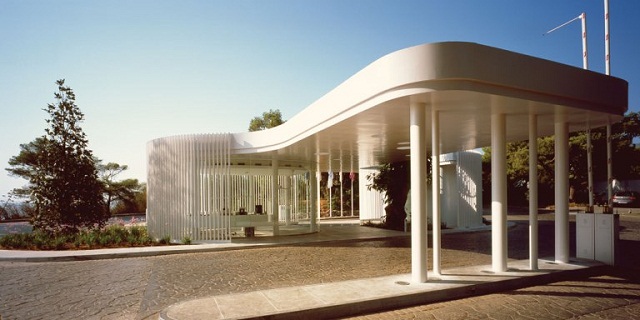 The main entrance to the “Asteras Vouliagmenis” resort was rescued from demolition following the intervention of Vouliagmeni Mayor Grigoris Konstantellos, who asked that it be saved as a local landmark.

The main gate of the former hotel and bungalows complex is an emblematic structure that had received that “High Commendation at the 1st World Architecture Festival” in 2008 in Barcelona.

The mayor’s request to the Central Council of Architecture, asking that it be listed as a contemporary monument, was successful and the spot was excluded from demolition plans. The management of the company currently owning the property also took a positive view of the decision, pledging to showcase the gate as contemporary cultural heritage monument.

The mayor’s intitiave was fully supported by architects Rena Sakellaridou and Morpho Papanikolaou, who designed the structure, as well as the web portal Ecopress.