The boost that summer brought to the airport of Athens continued slightly grounded and in September, which this year recorded double passenger traffic compared to the same month of 2020. The last three months, with peaks in July and August, improve the picture of this year the second very difficult year after the pandemic hit, while aviation market players are hoping – Covid permitting – for a good October.

To date, 2021 records a decrease of 57.9% for “Eleftherios Venizelos” compared to 2019, moving within the limits of the forecasts that from the beginning saw a gradual return to travel, without the big launch. With citybreak destinations looking set to return to the travel map from 2022, forecasts for Athens airport are optimistic.

The carriers, assessing as positive this summer season, are expected to maintain enhanced programs next summer, while Delta Air Lines has already announced a new connection with Athens from Boston’s Logan Airport.

Rhythms are slowing down 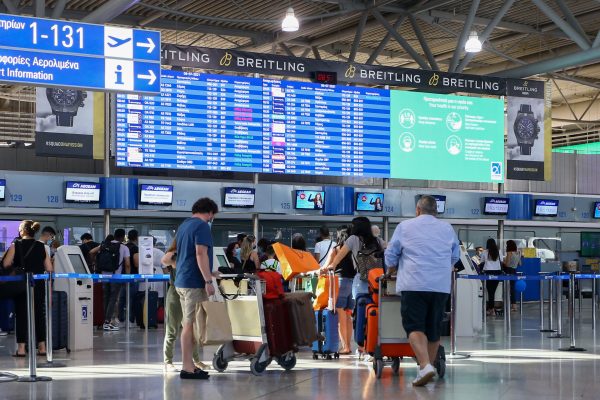 Greece seems to have built a good foundation for a return to normalcy from 2022 with the positive performance of this summer. Next year will be the first in which travelers are expected to be more willing to travel, as vaccination and the European digital certificate have built a firewall against the pandemic.

In particular, Europeans seem to want to return to travel, as shown by the latest European Travel Council (ETC) survey. According to its results, for the period July 2021 – January 2022, 7 out of 10 Europeans have travel plans in mind and in fact Greece is one of the main countries where they would like to travel. Also, more than half of respondents feel more optimistic about travel due to vaccines, while only 21% say they are skeptical.

Also, 53% of Europeans express a desire to travel abroad, to another European country, even if domestic travel remains high in the preferences for 35%. The countries in the first places are Italy, Spain, France, Greece, and Croatia. Meanwhile, bookings remain a last minute decision, which does not seem to change, keeping the booking cycle at 15-20 days before the trip.

It is estimated, at the same time, that after the complete collapse of the pandemic in the citybreak destinations, they will begin to gradually recover. In fact, the president of AEGEAN, Mr. Eftychios Vasilakis, recently made this assessment, stating that Athens will begin to recover – even as a stopover – after the historical lows recorded during the health crisis. In fact, he revealed that the company’s strategy for the next period includes the further strengthening of the destination of Athens, as “Eleftherios Venizelos” is a hub connecting the destinations abroad with both smaller islanders and the rest of mainland Greece.

It is noted that, according to the International Air Transport Association (IATA), passenger traffic in 2022 will approach the levels of 2014! The total number of passengers is expected to rise to 2.3 million in 2021 and 3.4 million in 2022, a similar performance to 2014 levels and well below the 4.5 million passengers in 2019. The magnitude of the crisis for airlines is also huge, with total losses, during the period 2020-2022, expected to even exceed $ 200 billion.

Passenger traffic in Greek airports up 62.35% in Jan-Sept