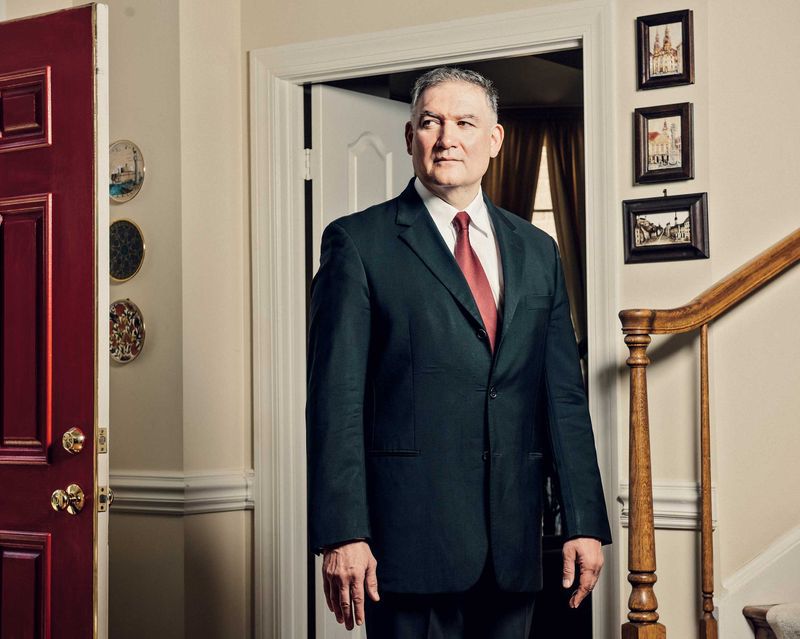 For 21 years, Andreas Georgiou worked in relative obscurity as an economist at the International Monetary Fund in Washington. When the European debt crisis hit and his home country of Greece began teetering toward bankruptcy, Georgiou felt a patriotic urge to help. In early 2010 he applied online to run a newly created office designed to clean up Greece’s much maligned economic statistics. He got the job, and in August 2010 he moved to Greece for a five-year term as president of the Hellenic Statistical Authority.

Six years later, rather than being seen as a hero who helped fix Greece’s broken finances, Georgiou is vilified there. His review of the country’s public accounting exposed years of bogus statistics and along the way made him a target for critics who blame him for the strict austerity measures Greece’s creditors imposed. Last year, Georgiou, 55, moved back to suburban Maryland and now faces a variety of civil and criminal charges in Greece, including one that could put him in prison for life. “This is beyond my wildest imagination,” says Georgiou, who says he feels at times as if he’s living in a Kafka novel. “This would be funny if it weren’t so tragic.”

After arriving in Greece, Georgiou quickly realized that entrenched forces were aligned against him. Within months he discovered his e-mail had been hacked after a member of the board that oversaw the statistics office, known by its acronym, Elstat, showed him a copy of a message he’d written. Although that board was later replaced, its members were especially upset, Georgiou says, that they didn’t get to vote on the stats before he released them. “I told the staff that we are going to draw a line in the sand,” he says. “I don’t care what you did before. We are going to go by the book.”

Georgiou uncovered lots of problems: Payment obligations weren’t being counted; social security payouts were being improperly calculated; interest on government bonds had been misstated. He required 17 government-owned entities, including railways, bus companies, and the state-run TV network, all of which were losing money, to be put on the books. That alone added €18.2 billion ($20 billion) to Greece’s debt.

Eventually, Georgiou restated Greece’s 2009 budget deficit to 15.4 percent of gross domestic product, 1.8 percentage points higher than the ratio the country used in negotiating its first bailout with the European Union and the IMF. Politicians claimed Georgiou had inflated Greece’s deficit so creditors could impose tougher austerity measures such as pension cuts and tax increases. Georgiou says the EU’s statistical arm consistently endorsed his numbers, after years of calling into question Greece’s stats.

The political furor that followed left Georgiou, who has a black belt in jiujitsu, fearing for his life. One critic publicly suggested he be hanged. Protesters broke into his office building. Accusations that Georgiou purposefully inflated the numbers led to a series of criminal investigations.

Georgiou is fighting an array of cases, including several that prosecutors dropped, only to be reinstated after outcries by politicians and the media. One editorial referred to him as “the executioner” of the Greek people. In June, Georgiou was convicted of criminal slander for calling Greece’s previous statistics fraudulent and given a one-year suspended sentence. His appeal is slated for Oct. 31. He also faces a related civil slander suit, as well as two other criminal cases. One, for “complicity against the state,” could carry a life sentence.

He’s represented by two lawyers in Greece, but Georgiou does much of the work on his defense himself to save money. A crowdfunding website set up by a group of international statisticians has raised more than €8,000 on his behalf.

A second fund has raised about $17,000. A single father of a 6-year-old daughter, Georgiou is looking for consulting work but has no full-time job. “He is depressed,” says Edwin Truman, a former Federal Reserve and
Treasury Department official, who is part of an ad hoc group of “friends of Georgiou” who are mounting an international lobbying effort to raise awareness of his plight and improve his image in Greece, where he is portrayed as an unyielding, politically naive statistician.

Truman first took an interest in Georgiou after noticing they both were Amherst College alums. Robert Kyle, the husband of one of Georgiou’s Amherst classmates, is also part of the group. A partner at the Hogan Lovells law firm and a former White House staffer under President Bill Clinton, Kyle is serving as Georgiou’s pro bono U.S. lawyer.

Nicolas Véron, a French economist, does much of the EU side of the campaign. “A man refuses to participate in cooking the books and paid a very heavy personal price,” Véron says.

Georgiou’s friends are reaching out to former colleagues at the Fed, the White House, and the IMF in hopes of getting the U.S. to pressure Greece to stop its persecution of Georgiou and recognize the legitimacy of his stats. As difficult as the last six years have been, he takes pride in the work he did—setting numbers that Greece’s creditors have relied on to give the country almost €300 billion in bailout funds. “I can tell you that I don’t regret anything, not one iota of what I have done,” he says. “I am actually quite happy, because I helped my country.”

The bottom line: The former head of Greece’s economic statistics agency faces criminal charges for the work he did rectifying its public accounting.