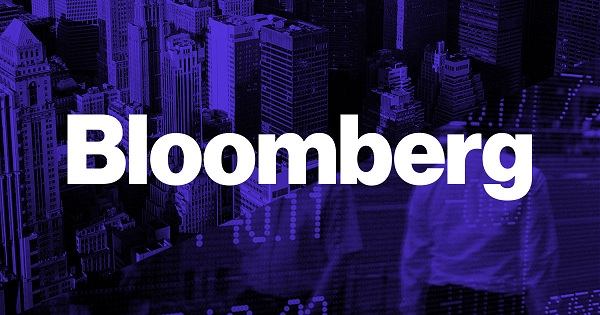 As Greek efforts to conclude a year-old review of its rescue program stall, the government’s ability to regain access to the public debt market grows slimmer, increasing the possibility Athens will have to seek another unpopular strings-attached bailout program.

Euro-area finance ministers meet in Brussels on Monday to once again tell Greece it needs to do more to get a new aid disbursement. Investor confidence in Greece has been shaken as the International Monetary Fund disputes the nation’s financial sustainability and the European Central Bank refuses to buy its bonds until more substantial debt relief measures are announced.

Greece’s bailout auditors — the European Commission, the ECB, the European Stability Mechanism and the IMF — are racing to complete the review before the start of a busy national election season in which surging populist parties would make protracted negotiations politically difficult. Greece needs to stabilize its economy by the time its 86 billion-euro ($91 billion) rescue program expires next year so that it can begin financing its own obligations.

“Delays in completing the review raise the risk of another bailout being needed,” said Nick Kounis, head of macro research at ABN Amro Bank NV. 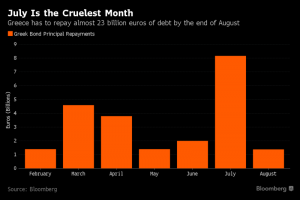 The government’s resistance to the IMF’s prescriptions and the refusal of European creditors to keep funding Greece without IMF participation has led to the standoff. The most that can be expected in Monday’s meeting of finance ministers is an agreement for bailout auditors to return to Athens to continue negotiations, according to an EU official.Even if a staff-level agreement between bailout auditors and the government is reached quickly and the IMF re-joins the Greek bailout, Athens will still need to legislate measures related to the review, prolonging when money can be disbursed, said the official, who asked not to be identified because the talks are private. In the past, it’s taken the Greek government months to implement these required actions.

The still unfinished tasks range from an overhaul of the country’s labor market to a new framework on out-of-court debt settlements, according to a memo sent by Finance Minister Euclid Tsakalotos to his colleagues last month.

“Greece is a special case,” Klaus Regling, head of the euro area’s crisis-fighting fund, said at the Munich Security Conference last week. “Nowhere the extent of the problems was as large as in Greece, and the administration as weak.”

The Greek government has been at odds with the IMF’s assessment of it’s financial projections, with Prime Minister Alexis Tsipras lashing out in recent days at the Washington-based fund. Earlier this month, Tsipras said the IMF was afraid to tell Europeans the truth and is playing a perpetual poker game.

“I’m quite confident that we’ll do it exactly as agreed,” German Finance Minister Wolfgang Schaeuble said on ARD public television Sunday regarding IMF participation in the bailout. “Greece is on a good path. Last year’s developments — as Mr. Regling has rightly pointed out — are better than the IMF has foreseen.”

Uncertainty over whether the government will complete the tasks required by creditors in time to avert a default in July — when more than 6 billion euros of bonds come due — threatens to derail an anticipated economic rebound this year. Economic output unexpectedly contracted in the last quarter of 2016, while deposit outflows from the nation’s battered banks resumed this year.

Excessive taxation of companies and the middle class to fund an overly generous pension system and an unacceptably high threshold for tax-free income is also to blame for Greece’s continuing economic malaise, according to the IMF. The fund says that in the absence of an overhaul of income tax and pension benefits, Greece won’t be able to meet the budget targets envisaged in its latest bailout agreement, and refuses to join the program.

The yield on Greece’s two-year note rose 14 basis points to 9.95 percent on Friday. Greek 10-year notes have traded as high as 7.85 percent, almost twice the level of Portugal’s benchmark securities. 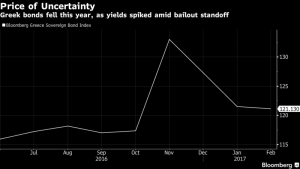 Despite the risks associated with having to eventually negotiate a new loan agreement, some see a silver lining.

Greece shouldn’t be allowed to access the capital markets as investors will ask for a very high risk premium, said Daniel Gros, Director at the Brussels-based Centre for European Policy Studies. “The official creditors should refinance all the remaining private debt coming due at their low official rates. The country would then not throw away huge interest payments,” he said.