When it comes to iconic swimsuit moments on film, few can compare with Bo Derek‘s bathing suit jog down the beach in 1979’s 10.

Her braided hair and beige one-piece was an immediate fashion moment. And on Saturday, the 59-year-old actress returned to the beach — though this time, without the braids.

Derek was in Greece, participating in a 3000-meter swimming marathon. While her iconic braids were nowhere to be found, her black bikini bottoms and pink swimming top showed that nearly four decades later, her beach bod is still a perfect 10. 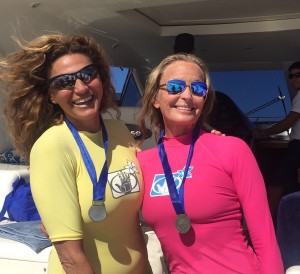 The swim was delayed a few hours due to weather, but Derek eventually made it through the challenge. “The conquering heroes,” she wrote on Twitter after the event.

Derek has been dating John Corbett since 2002 — though the 55-year-old actor appeared to sit the marathon swim out.

The two were set up by Hollywood agent Norby Walters. They recounted the experience in a 2015 visit to Today.

Derek hadn’t dated anyone in five years. She said the attraction was immediate and that she liked him “instantly” — something that hadn’t happened to her in past relationships.

“I kept saying to my friends, ‘I’ll wait until all the sparks and all that get going.’ And it finally happened,” she said.