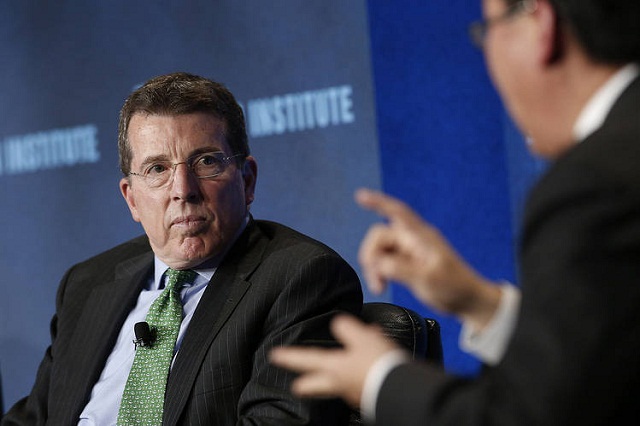 Their optimism about the prospects of the Greek economy underline in an interview the Founder and CEO of Atlas Merchant Capital which has acquired Credicom Mr. Bob Diamond, as well the chairman of Credicom Corrado Passera and the former chief executive officer of the Italian bank IntesaSanpaolo and now managing director of Credicom Anastasia Sakellariou.

They believe that the risk of Grexit has been eliminated and the country is already in a path of sustainable recovery as long as fiscal discipline and reforms continues.

Greek banks were at the center of the crisis. How did you decide to invest in a bank?

B.D.: Europe and particularly the countries of the European region, with Greece stand out, offer excellent investment opportunities. Greece was one of the first countries to have felt the effects of global initiation and after the European crisis was forced into major reforms. Now the banking sector in Greece is one of the most concentrated sectors in the EU. and offers great opportunities Seeing the important liquidity needs of Greek businesses coupled with the rapid expansion of digital banking, we felt that the conditions are ripe to move towards the creation of a new Greek bank that will change the market.

The crisis in Greece has been rekindled many times in recent years. Are you worried about the possibility of a new derailment?

C.P. : We believe that after the 2015 September elections there has been a radical change in the country, as the third memorandum and the preservation of Greece’s mood in the Eurozone have received overwhelming political support. Government and opposition agree on the European direction of the country. This was confirmed by the successful completion of the 1st, 2nd and now the 3rd Assessment, which eliminates the risk of Grexit.

B.D.: I am aware that the latest developments confirm our optimism. I remind you that we saw the great potentials and prospects of recovery in Greece and we went ahead with the acquisition of Credicom in 2016. Of course, Greece still faces big challenges with higher public debt, but there is a proven track record of cooperation with the EU, which creates confidence that new challenges will be addressed. Certainly, political conditions can change, but we believe that the risks and uncertainties of the past years are behind us.

What are the conditions for Greece to regain confidence?

C.P.: A range of economic indicators such as GDP, strengthening consumer and business confidence, and the successful exit from markets show that Greece is already on a path of sustainable growth. A clear exit from the financing program in August, with a clear commitment to securing debt sustainability – in the medium and long term – will be the key for further boosting confidence. In the long run, Greece’s successful exit from the crisis will depend on the consistent implementation of fiscal commitments and reforms, the reduction of non-performing loans and political stability.

Are you considering other investments in Greece?

B.D.: We have been constantly evaluating the Greek market for a long time, looking out for investment opportunities with emphasis on the financial sector. Through Credicom we can also look at smaller opportunities that might be interesting for Credicom and which Atlas would be hard to invest in. In general, I would say that we have seen opportunities to invest in loan portfolios, other bank assets, funds management and FinTech.

What is your opinion for the domestic banks and the stress tests? Is there a risk of recapitalization?

C.P.: The Greek banks have managed to survive the crisis but they are burdened with problems such as the high stock of non-performing loans. Sales of red loan portfolios are important steps in the right direction. As far as the stress test is concerned, it is likely that it will not reveal significant findings, as banks are under the constant and close supervision of the SSM. In addition, the conditions for the Greek banks and the economy are much better than those in 2015. However, the level of NPEs will be a cause of concern for quite some time. Greek banks may not need new funds now, but they might need in the future. This will depend on the course of red loans.

What are your plans for Credicom?

A.S.: Our ambition is to establish Credicom as the leading alternative bank of the domestic market with a flexible functional structure based on digitization. We will focus on financing small and medium-sized dynamic businesses. At the same time we will be active in consumer and car purchase loans. Outside from our plans, are the large companies, mortgages and credit cards. Our goal by 2022 is to have a loan portfolio of 4 billion, a market share of 2%, a network of 40 branches and 500 employees.

Given the restrictions of the systemic banks due to red loans why don’t you move more aggressively?

A.S.: We want to move forward fast but steadily and give attention to high quality services. Growth is not a panacea, The challenge for us is to achieve a smart growth by maximize the profitability and minimize the risks.

Do you Worry about the current situation in Europe and the future of Eurozone?

B.D.: I have not been very optimistic about Europe over the last decade but the crisis in the Eurozone as well as the Brexit forced the countries to cooperate more closely. The euro was an ambitious but incomplete plan and the structural problems became evident during the first 15 years of its circulation. However, steps have been taken in the right direction in order to accelerate the European integration. The long-term Eurozone reform engagement and the new coalition government in Germany will play a key role in shaping the EU’s future course.

The so-called “hard” Brexit seems inevitable. How do you see the situation?

B.D.: We closely monitor and prepare for all Brexit contingencies. We continue to believe in the UK as a financial center, having acquired a bank that focuses on small and medium-sized businesses in the country after the Brexit vote.

C.P.: Brexit is a “wound” for Europe and I hope – even now – that there are some chances to overturn this development.