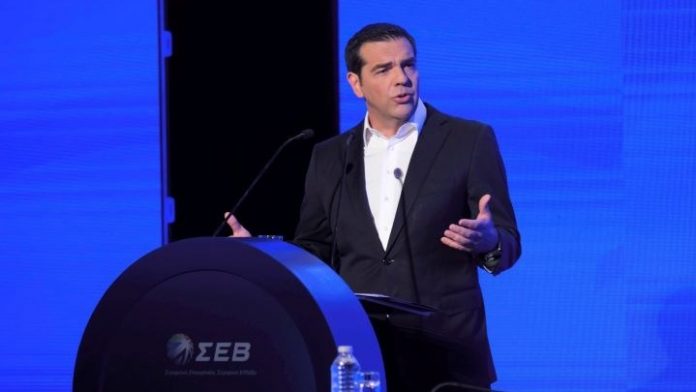 The coronavirus pandemic arrived while Greece was on a recession course, SYRIZA leader Alexis Tsipras said at the annual assembly of the Ηellenic Federation of Enterprises (SEV), held by teleconference, on Monday.

Unfolding this argument, he said that “some believe that deregulating the labor market, reducing how long the collective labor contracts are valid for, the keeping of starting salaries low and favoring lay-offs will all give rise to a more competitive economy, but the truth is,” he stressed, “this policy will have the exact opposite effect.”

Further, Tsipras said, the amendments passed by the New Democracy government since July 2019 were known to the Syriza government and therefore his party, he said, was then already in disagreement with SEV over these labor reforms.

“It seems that New Democracy had agreed these before they became a government,” he said, and the results of these policies, he underlined, have now become apparent, as employment rates started dropping four months before the pandemic arrived, marking a recessionary trajectory that began in October 2019.

This very same policy, he highlighted, was also implemented during 2010-2015, a time “when the country plunged into a deep recession and high unemployment.”

Now, Tsipras added, at the current predicament, “it is unthinkable that the government considers its business support programs to be successful,” and that figures show that the majority of businesses have not benefited from government support while that banks remain inaccessible to them, he pointed out.
“If there is no coordinated national effort right now, and political choices make the middle and lower classes pay for this crisis, then its consequences will follow us for a much longer period of time,” he underlined.

The main opposition party leader said that Monday’s SEV assembly comes “at an unprecedented time for both Greece and the entire world.”

The coronavirus pandemic forced citizens to “lock themselves in their homes while the economy froze,” he added. Considering what comes next against a potential second outbreak “is a very difficult equation, but not unsolvable,” he noted.

He then stressed the need for a “timely assessment of the damage’s magnitude,” while he warned that “inaction usually brings disastrous results.”