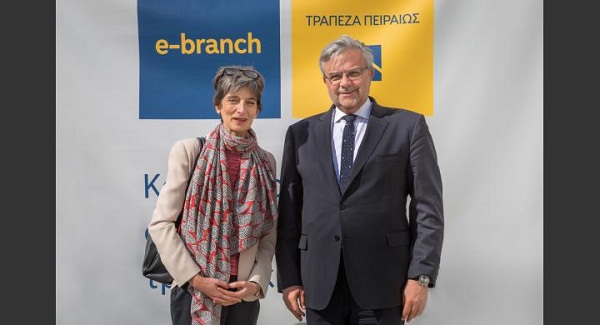 The British Ambassador in Athens Kate Smith and the presidents of the Greek-British Chamber of Commerce Anna Kalliani and Alexandros Turner on Tuesday visited Piraeus Bank’s fully automated e-branch store on Alexandras Avenue in the Ambelokipi area.

They were welcomed by Piraeus Bank CEO Christos Megalou and given a tour by the bank’s Deputy General Manager for Digital Business Stefanos Mytilineos, who presented the innovative applications and operation of the e-branch and briefed them on the expanded range of options that the new technologies and applications offer customers in their daily transactions.

On his part, Turner said the e-branch is “a jewel of technology and innovation.”

Presenting the new concept of banking transactions through the e-branch network, Mytilineos stressed that he has succeeded in offering “innovation for all and not innovation for show.”

Three fully automated branches of Piraeus Bank’s e-branch network are currently operating in Chalandri, Ampelokipi and the McArthurGlen Village retail park, while another is scheduled to open in the seaside suburb of Glyfada by the end of the year.