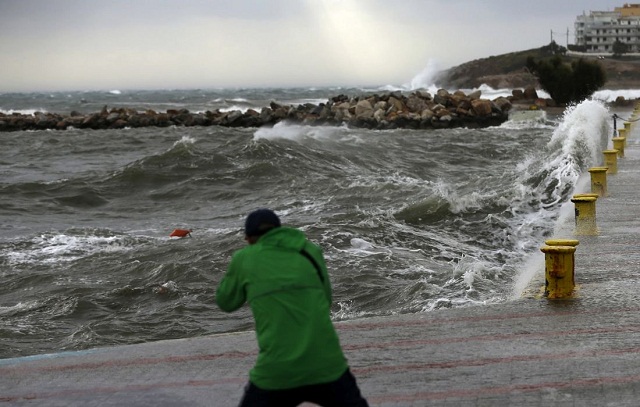 Authorities have been forced to shut down ferries and schools as a cyclone warning is put in place for Greece.

In a presser on Thursday night, along with the director of Greece’s National Meteorological Service Thodoris Kolydas, General Secretary for Civil Protection Yiannis Tafyllis said that state mechanisms were on full alert ahead of the arrival of the cyclone expected in the next few hours.

Kolydas said that reasonably accurate predictions could only be made for the next 48 hours and warned that the public should expect winds of 9-10 Beaufort and strong rain and storms, especially in the southern Peloponnese, Crete and western Cyclades islands. The phenomena will also affect south and eastern Attica on Saturday, he said.

The press conference was given after a meeting of all agencies involved in civil protection to discuss the details of the plan for dealing with the severe weather front, such as the police, fire brigade, emergency services, defence ministry and local authorities, among others.

Kolydas noted that it was hard to predict the precise course, movement and intensity of such phenomena but expected the storm to hit in two phases, with strong rains on southern parts and then move on to Attica on Saturday.

“I would not say that the rainfall will have especially great intensity and, at the same time, during the night there will be a small and brief break in the weather,” he noted but this could pick up again later and move eastward on Saturday evening to night. It would continue from Saturday to Sunday but gradually start to lessen in intensity, he added.

The meteorological service was monitoring the phenomena and will give regular updates, he said.

Tafyllis advised the public to show extra caution, secure any objects that might be blown away and cause damage or injuries, avoid crossing water courses during heavy rain, avoid passing under big trees, signposts and places where light objects might be blown free.

Rain and thunderstorms are forecast for Friday, starting in the southern Ionian Sea and moving East towards the Aegean, at places very intense. Winds 4-6 on the Beaufort scale in the southeast, and rising to 10 at sea and some localities on land. Temperatures ranging between 14C and 22C, up to 5 degrees lower in Ipiros. In Athens, same with intense locally at midday. Wind velocity 5-8 Beaufort, temperatures 14C-21C. In Thessaloniki, overcast with local rain, winds 3-5 Beaufort, temperatures from 11C to 23C.