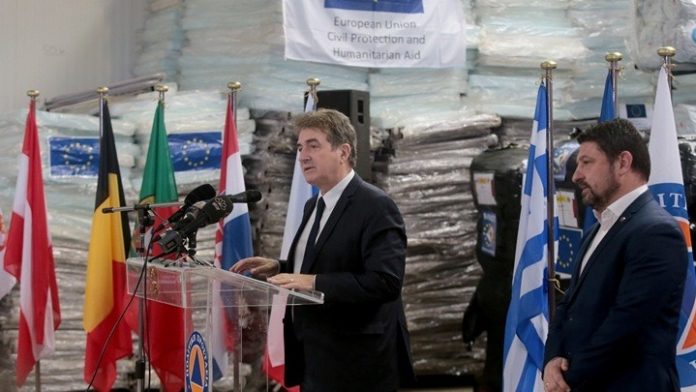 The Greek government expressed its appreciation to the embassies of 15 EU countries that responded to Greece’s request for humanitarian aid from the European Mechanism of Civil Protection, at an event on Tuesday.

Speaking on behalf of the government, Citizen Protection Minister Michalis Chryssohoidis and other officials was at hand for the arrival of the first batch of help at the Fire Brigade’s central storage unit.

The assistance will be distributed to facilities housing migrants and refugees in Greece and shows the practical help provided by fellow EU member states, the minister said. In addition, he referred to EU help through the Frontex agency at the borders with Turkey in the Evros region, where Turkey has opened its borders and encouraged thousands of migrants to enter Greece, trapping them at the border.
“Greece provides a big welcome to any prosecuted person,” Chryssohoidis said, “but we cannot accept having third countries use people like bullets to fulfill their own plans.”

Speaking on behalf of the European Commission, George Moschovis, deputy chief of the representation in Greece, said that the Commision president will visit Athens again this week “to show the Commission’s and her personal interest” in the hard times a member state is going through.