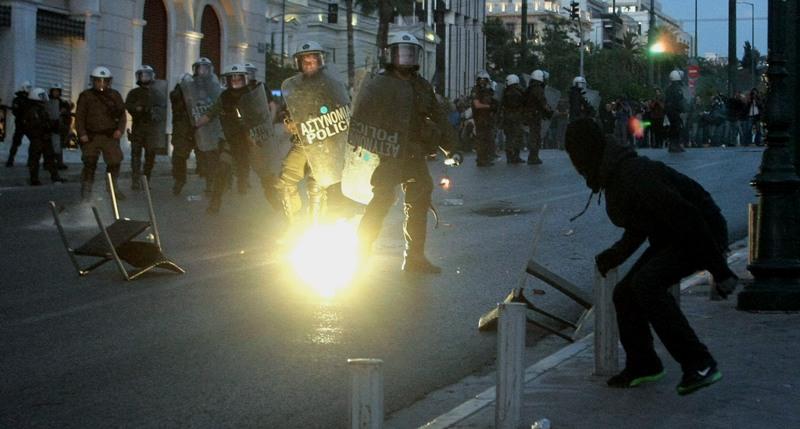 Nine people were detained during clashes with anti-establishment protestors in Athens’ Exarchia area and the protest rally in Syntagma Square on Sunday, the Hellenic Police (ELAS) announced.

Six were detained during violence that erupted in Exarchia at around 22:30 on Sunday night near Stournari and Bouboulinas Street, where the rioters set up makeshift barricades using burning dumpsters and attacked police with fire bombs and other objects.

Three had been detained earlier during incidents around Syntagma Square.

ELAS said that around 50 people currently remain in Exarchia Square but calm has been restored throughout.

Police also announced the launch of an investigation into the injury of Popular Unity (LAE) Political Secretariat Sofi Papadogianni, who claimed she was hit on the head by a teargas canister while peacefully protesting in Syntagma Square.

Trade unions came out in force throughout the country on Sunday, with labour rallies held in every Greek city to protest against the draft tax and pension reform bill due to be voted on late on Sunday night, as well as to mark Labour Day. Protest action in Athens began early on Sunday morning, with the General Confederation of Employees of Greece (GSEE) holding a rally in Klafthmonos Square and the Communist Party of Greece (KKE)-affiliated trade union faction PAME holding a rally in Syntagma Square opposite Parliament, together with Greek farmers.

The day’s action will culminate in a rally and concert organised by the civil servants union federation ADEDY, starting at 18:00 in Syntagma Square as lawmakers continue the debate on the controversial bill, leading up to the late-night vote.

Earlier, representatives of ADEDY, pensioners and other trade unions, political parties and organisations attended the GSEE rally and took part in a march to Parliament.

PAME is also planning three “pre-rallies” later on Sunday at 19:00, at Omonia Square, the Old Parliament building and the Temple of Olympian Zeus, while it will hold a solidarity concert during events in Syntagma called “A song for the refugee”.

Journalists also joined in the action, with their union federation POESY calling rally outside the Athens Journalists Union (ESHEA) at noon, followed by a march to Parliament. POESY and ESHEA were protesting against the abolition of an advertising duty that currently finances the journalists’ social security and pension funds.
PAME’s rally in Syntagma was addressed by KKE General Secretary Dimitris Koutsoumbas, who said that “capital and the governments were now trying to take back all the entitlements that the workers in our country and throughout the world had shed their blood to win. We must not do them the favour. The working class, the labour movement, in our country and in Europe, worldwide, must regroup, rally its forces and pass to a counter-attack.”

Rallies were also held throughout Greece in Thessaloniki, the prefecture capitals in the Peloponnese, the port city of Patras, Agrinio, Mesologgi, Nafpaktos in western Greece, and the cities of Hania and Iraklio in Crete, among others.