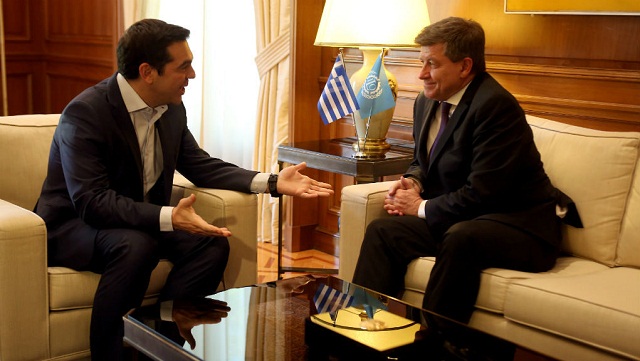 Greece’s case was directly linked to Europe’s future while collective bargaining was a fundamental labour right, UN International Labour Organisation (ILO) Director-General Guy Ryder said on Friday, in statements as he was leaving a meeting with Prime Minister Alexis Tsipras at the Maximos Mansion in Athens.

Welcoming Ryder, Tsipras noted that this visit came “at an extremely critical time for Greece in its efforts to recover” and gave a “strong symbolic message that our efforts to stop a seven-year state of exception from European best practices on labour rights must be vindicated.”

The prime minister expressed his conviction that with this broader support for Greece, “developments indicate that we will likely have a good result in the negotiations underway for the second review.”
Leaving the meeting, Ryder noted that the right to collective bargaining was one of the fundamental labour rights that the ILO defends. “We believe that respect for this right, and taking it into account, is an important part of the consideration, not just for the Greek players (government, employers, workers) but also for your international partners,” he told reporters, adding that the ILO will “strongly support” this case.

The ILO director-general said it was important to link specific conditions in Greece with the future of Europe and the European social model. “The future of Europe must be strongly based on the social values that made it successful for decades,” he said, adding that Greece’s case was directly linked to Europe’s future.