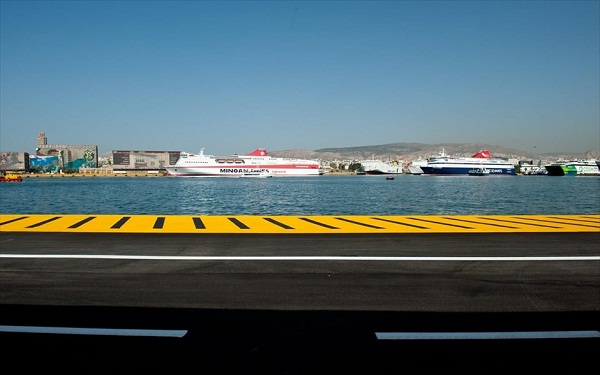 The upgrading of Greece’s largest port and its rising importance in international trade were some of the points noted during the official opening on Monday of extension works at Pier III and the inaugural stop of the giga-container ship “Cosco Shipping Taurus”.

The ceremony was attended by Greek officials, representatives of China-based Cosco, which is the majority stakeholder of the Piraeus Port Authority (OLP), and the Chinese ambassador to Greece among others.

The Pier III project is expected to be completed by August 2018 and be able to accommodate two giga-carriers at the same time. These are ships that can handle 20,000 containers of the standard 20 twenty-foot equivalent units (TEUs) each, Shipping Minister Panagiotis Kouroumblis said. In addition, “the placement in position of the new 80,000-ton floating reservoir will free more space at the air-congested ship repair zone.”

In addition, Greece’s railroad network long-overdue upgrades will “reduce transport time from the port of Piraeus to Balkan countries and Europe by three hours, as well as reduce the cost of transport to the Greek borders by 20%,” Deputy Transport and Infrastructure Minister Nikos Mavraganis said.

He added that the country has acquired collaborating status with the Transport Corridor Europe-Caucasus–Asia (TRACECA), an alliance of countries promoting trade and transport collaboration in the regions of the Black Sea basin, South Caucasus and Central Asia.

“2017 marks the first year that the sector of transport outpaced in growth that of tourism, with 18%, over tourism’s 14%,” Mavraganis said, predicting that the transport sector, if supported, could boost Greece’s GDP by 2–3 points.