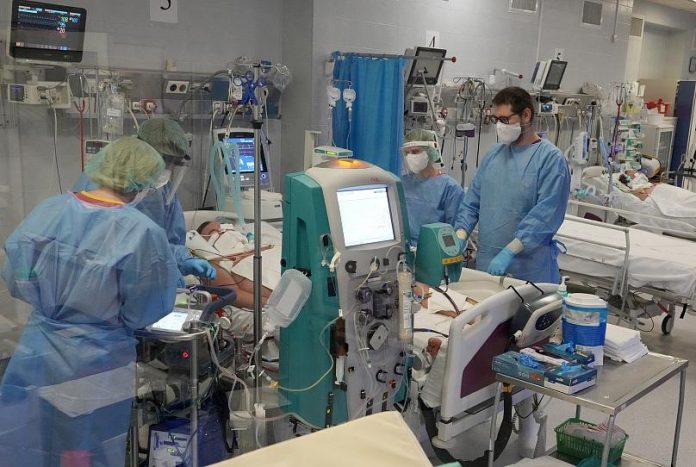 Several countries in Europe have registered a record number of COVID-19 infections — here is our summary of the situation across the continent.

The number of new coronavirus cases globally rose by 20 per cent last week to more than 18 million, according to the World Health Organization (WHO).

WHO Director-General Tedros Adhanom Ghebreyesus said on Tuesday that the highly infectious Omicron variant “continues to sweep the world.”

“We are concerned about the impact Omicron is having on already exhausted health workers and overburdened health systems,” Tedros said.

Some countries have taken steps targeting the unvaccinated, while programmes are also being rolled out to vaccinate young children.

On Tuesday, Public Health France reported that there were a record 464,769 new cases in the last 24-hour period.

The number of COVID-related deaths also increased by 288 on Tuesday to 100,339, according to official figures.

Just one day earlier, the number of COVID-19 patients in French hospitals also rose by a record 888 to over 25,000 in total.

Germany also saw a new record number of confirmed cases on Wednesday, with 112,323 new infections in the past 24 hours.

It is the first time the country’s disease control agency reported more than 100,000 daily cases. A further 239 COVID-related deaths were also registered on Wednesday.

But Germany’s association for intensive care medicine (DIVI) said the number of COVID-19 patients in intensive care units was falling despite the increase in cases.

Health Minister Karl Lauterbach has warned that the country has not yet reached the peak of infections and has recommended that Germany introduce a nationwide vaccine mandate by May.

Almost 73 per cent of the German population have received a full course of vaccines against COVID-19, while nearly 48 per cent have had an additional booster shot.

German police say that are investigating thousands of forged vaccine certificates, according to the DPA news agency.

Those who supply or use fake certificates could face severe penalties, from fines and suspended prison sentences to losing their jobs.

In the UK, authorities have relaxed measures after government scientists reported that the surge of infections “has now peaked nationally”.

British Prime Minister Boris Johnson told MPs on Wednesday that hospital admissions and patients in intensive care units in most of England were stabilising or falling.

The government will no longer advise people to work from home, while face masks will be scrapped in classrooms starting Thursday.

Johnson added that more than 90 per cent of those aged over 60 in the UK have now had their booster shot.

Moreover, the UK is debating whether to scrap the requirement for those infected to self-isolate for five full days.

The Netherlands has been in a tough lockdown since mid-December amid a surge in cases. Last week, hairdressers, gyms, and nonessential stores were allowed to reopen under an easing of restrictions but bars, restaurants, and theatres have to remain closed.

But hundreds of Dutch bars and restaurants also opened their doors as a protest against the lockdown they say is crippling their businesses.

Meanwhile, a barber cut the hair of 10 visitors while 10 more people got a nail treatment at the Van Gogh Museum.

“I understand the cry for help and that artists want to show all the beautiful things they have to offer us, but the opening of society must go step by step,” tweeted Culture Minister Gunay Uslu.

The Dutch government has said it will look at possible further easing on 25 January, as hospital admissions decline despite a rise in case numbers.

The leader of the main opposition party in Hungary confirmed on Wednesday that he has tested positive for the virus amid a surge in cases nationwide.

Peter Marki-Zay — who will represent a six-party coalition in April’s parliamentary election — said on Facebook that he had received a positive test after exhibiting mild symptoms.

His announcement came on the same day that Hungary reported the highest number of daily cases since the beginning of the pandemic.

According to the government’s official coronavirus website, 14,890 new cases were detected on Wednesday — nearly double the figure from last week and 2,000 higher than the previous record in November.

Prime Minister Viktor Orban has relied on boosting vaccination rates to defend against the pandemic rather than reimposing measures.

More than 61% of Hungarians have received at least two vaccine doses, below the European Union average of 69.1%, according to the European Center for Disease Prevention and Control.

Slovakia has restricted access to public gatherings on Wednesday in the latest measures to tackle the spread of the Omicron variant.

Citizens will need to have received three doses of a vaccine, two doses plus a negative test, or have recently recovered from infection to attend many events.

The number of people at weddings, parties, and other venues will be limited, the government said on Wednesday. All bars and restaurants will also have to be closed between 10 pm and 5 am.

Slovak authorities have been expecting the Omicron variant to become dominant in January.

The President of the European Council Charles Michel has had to miss the bloc’s latest parliament session after a close contact tested positive for COVID-19.

Michel became the second top-level European Union official who was forced to pull out of Wednesday’s session in Strasbourg, where French President Emmanuel Macron discussed the main challenges for the EU presidency.

European Commission President Ursula von der Leyen had already canceled her attendance on Monday after her driver tested positive for the coronavirus.

Poland and the Czech Republic

On Wednesday, Poland’s health minister Adam Niedzielski stated that he was in favour of making COVID-19 certificates mandatory for employees.

Poland currently has some 31,000 hospital beds for COVID-19 patients, and the current infection rate posed a “great risk to the efficiency of the health care system,” Niedzielski said.

The right-wing government of prime minister Mateusz Morawiecki has also backed draft legislation that would force workers to show proof of vaccination or recovery from COVID-19 to their employers.

But across the border in the Czech Republic, the government has dropped proposals for a vaccine mandate.

An order released in December by former prime minister Andrej Babiš would force citizens aged over 60 — as well as medical workers, police officers, and firefighters — to be vaccinated.

However, the new coalition government under Petr Fiala has said that the order was unnecessary.

“We’ve agreed that vaccination against COVID-19 won’t be mandatory,” Fiala said while stressing that his government still considers the vaccines “the best tool to fight COVID-19.”

Despite the record case numbers, the number of COVID-19 patients in Czech hospitals dropped to 1,635 on Tuesday.

Bosnia and Herzegovina is experiencing the harshest wave of the pandemic so far, with at least 70 per cent of cases due to the rapid spread of the Omicron variant in the country with one of the lowest vaccination rates in Europe, stagnating at 22 per cent.

Determining the number of daily COVID-19 cases has also become a complicated task for the health authorities, with the various levels of government opting for a switch to rapid testing instead of PCRs or a combination of the two due to a lack of resources in some parts of the country.

The main laboratory in the capital Sarajevo has been processing samples with a backlog, and the figure of 2,992 positive cases on Wednesday (19 January) combines several days of PCR results in the reported total.

However, the official number has raised concerns among some experts that the actual infection rate is much higher, considering the low number of tests conducted overall (6,025 samples on the same day) while hospitals across the country are struggling to tend to incoming patients.

Bosnia is second on the continent in cumulative COVID-related deaths, with 4,255 casualties per one million citizens placing it just behind Bulgaria with 4,688.

The number of COVID-19 cases in Serbia is still on the rise, with official numbers hitting a five-figure mark for several days in a row.

There were 17,318 cases were registered on Wednesday, while 2,619 new patients admitted to COVID wards across the country, official figures state.

The country’s health authorities believe that the Omicron variant is dominant at the moment, but that Delta is still circulating, blaming the latter for hospital capacities rapidly becoming overburdened.

Meanwhile, the Serbian government has introduced new quarantine measures on Wednesday, where those testing positive are now allowed to leave their homes after seven days with permission from their GP. The mandatory self-isolation for those who were in close contact with a person positive with COVID has also been reduced to a total of five days.