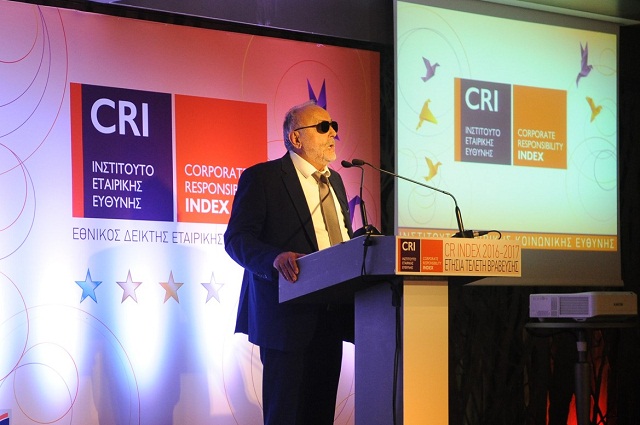 On behalf of the government, Minister of Shipping and Island Policy Mr. Panayiotis Kouroumplis and Mr. Antonis Papadarakis, General Secretary of Commerce and Consumer Protection, participated in this year’s event. Also, from New Democracy, the Vice-President Mr. Kostis Hatzidakis.

This year in Greece, and after the two first DIAMOND awards from Athenian Brewery and OTE Group in the past two years, the Institute awarded the third DIAMOND, the top distinction of the institution, to Piraeus Bank.

All the distinctions by category:

The Aegean Motorway and Attikes Diadromes S.A. took the CRI Pass distinction held for the 3rd consecutive year by the Institute for Companies taking their first steps in Corporate Social Responsibility.

The Institute also awarded National Bank and DEPA SA for their long-term participation and support to the CR Index. 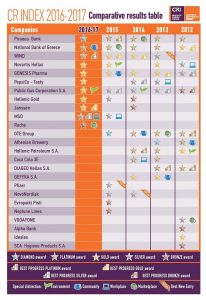 The Chairman of the Board of Directors Of the Corporate Responsibility Institute, Mr. Dimitris Mavros stressed that “corporately responsible businesses not only go better when the economic climate is favorable, but because they have incorporated social and environmental factors at the heart of their business strategy, they also have the ability to recover faster from the crisis. This is also the real competitive advantage of responsible business.”

The Vice Chairman of the Board of Directors Of the Corporate Responsibility Institute, Mr. Nikos Avlonas, referred to the recent CSE survey on Social Reports in Greece, which reveals a significant increase up to 36% from 2012 in the issue of accounts.

The event was co-ordinated by journalist Nektarios Notis. Sponsors of the award ceremony were the newspaper “TO KEFALAIO”, Capital.gr and Forbes, the Direction Publishing Agency and the ICAP Group.

The Main sponsor of the event was the OTE Group and Sponsor VIANEX SA.

The event was supported by the PRC Group/The Management House, CSE and Palladian.