The International Monetary Fund’s (IMF) “unreasonable demands” were the reason why progress in completing the second review of the Greek programme had stalled, State Minister and government spokesman Dimitris Tzanakopoulos said on Tuesday, during the regular press briefing. He indicated, however, that the government was prepared to discuss a “guarantees mechanism” for the IMF if that was the only obstacle to completing the review.

“The government has stressed many times and in the clearest way that there is no possibility it will proceed with the legislation of new measures. However, if there is agreement on all matters – such as the medium-term measures for the debt and the fiscal path that the Greek economy will follow in 2018 – and all that remains is an increased guarantee toward the IMF after meeting the targets, then we are prepared to enter into a discussion on an increased guarantees mechanism,” Tzanakopoulos said.

According to the spokesman, “the main body of the second review is almost completed and the differences that existed at the start of the negotiations have been bridged,” barring the objections of the IMF, which disputed the forecasts of both the Greek government and the European institutions concerning the Greek economy after August 2018. Asked to what extent the Greek government was prepared to back down in order to complete the second review, Tzanakopoulos noted that Athens had already compromised on 95 pct of the issues linked to a staff-level agreement.

The guarantees’ mechanism will be the government’s concession in order to find a point of balance that will lead to completing the second review and overcoming the disagreement between European institutions and the IMF, he added. He also explained that this would be a “fiscal correction mechanism” that would never actually be triggered since the Greek economy’s economic figures would make this unnecessary.

“The government is continuing to work hard to accelerate the country’s growth course, to meet fiscal targets and to protect the interests of the majority of society,” Tzanakopoulos said. He cited state budget figures reaffirming that the primary surplus is 439 billion euros on an amended cash basis, as well as figures showing that the 1.98 bln euro target was outperfomed and that revenues were 1.6 billion euros over the initial target.

Tzanakopoulos noted that the positive course was confirmed by European Stability Mechanism (ESM) chief Klaus Regling and Eurogroup President Jeroen Dijsselbloem, adding that the negotiations will continue on this basis.
The positive aspect, according to Tzanakopoulos, was that everyone shared the view that the disagreement was not technical and for this reason must be solved at a higher level with political conditions.

We are intensifying our efforts to complete the second review without additional measures, with a restoration of collective labour contracts and Greece’s participation in the quantative easing programme in 2017 Q1 that will speed up our return to borrowing from the markets, said the government spokesman.

In response to other questions, Tzanakopoulos said it was positive that Germany had left open the possibility that there could be agreement and the programme continued without the IMF. Regarding the German finance minister’s statements, he said these merely stated the “self-evident, namely that any modification concerning the participants in the programme must be approved by the German Parliament.”

The spokesman said the government had upheld the agreements of July and August 2015 and wanted a decision to be taken as soon as possible “to avoid unnecessary procrastination and delays on the matter of the second review.”

Replying to questions about the “missing” staff hired for hotspots, the spokesman denied that anything illegal or clientelist had taken place. He pointed out that the hirings had been approved by the European Commission and that they were made in the context of a community service programme to cover the total requirements of municipalities, not just refugee centres.

Turning to efforts for a Cyprus solution, Tzanakopoulos said that the top national priority is a successful outcome of the negotations for the Cyprus issue. He said that Prime Minister Alexis Tsipras was in constant communication with Cyprus President Nicos Anastasiades ahead of the resumption of talks on 18-20 January on a diplomatic and technical level.

Asked to comment on press reports claiming that UN Secretary Antonio Guterres had expressed displeasure with Greece’s Foreign Minister Nikos Kotzias, Tzanakopoulos pointed out that Guterres had personally denied these reports and said that his discussion with Tsipras was exclusively on the terms leading to a just and viable solution to the Cyprus issue.

According to Tzanakopoulos, the aim of the specific articles was “to create obstacles in the intense efforts being made by both the Greek and Cyprus governments to achieve a just and viable solution.”

Referring to Tsipras’ meetings with other foreign officials, Tzanakopoulos said the prime minister will meet Italian President Sergio Mattarella in Athens on Tuesday evening, while he is scheduled to visit Lisbon on January 28 for the second meeting of EU Mediterrenean countries, a follow-up of the first meeting held in Athens at his inititative. On January 30, Tsipras is to visit Belgrade, where he will hold talks with the political leadership aiming to strengthen cooperation and friendship between Greece and Serbia. 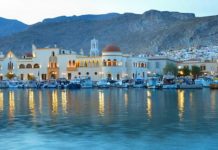 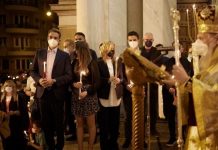