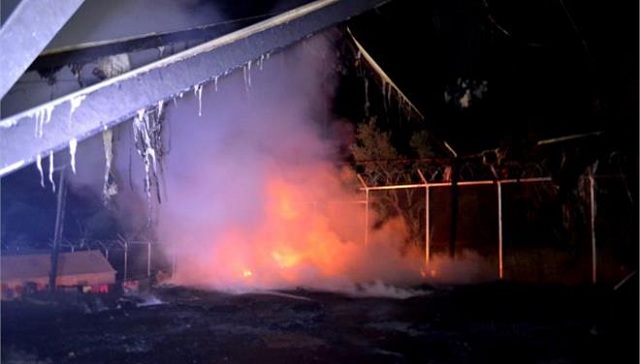 Rioting migrants have forced border officials to leave Greek islands because of fears over their safety.

Overcrowded camps have been set ablaze as the inhabitants grow frustrated that they are being stopped from continuing to Europe.

Belgium has repatriated asylum staff deployed to help Greece after they were aggressively targeted by those seeking
refuge.

In the latest chaos, a camp on the island of Chios was torched after police accused migrants of stealing fireworks and alcohol from local shops.

Since March, new arrivals from Turkey have been stopped from crossing to the Greek mainland from the popular holiday destinations such as Lesbos and Kos.

Belgium’s migration secretary Theo Francken said it was no longer safe for his staff to help process asylum applications and conduct interviews there because of growing hostility.

At one time the country had several dozen experts assisting the Greek authorities on the islands.

He told Belgian newspaper De Standaard: ‘The security situation has worsened. The atmosphere is particularly grim because asylum seekers, often single men, are stuck there and realise they cannot journey on to Germany or Belgium.

‘Some express their frustrations in a particularly aggressive fashion. In recent days asylum agency staff have been targeted.’