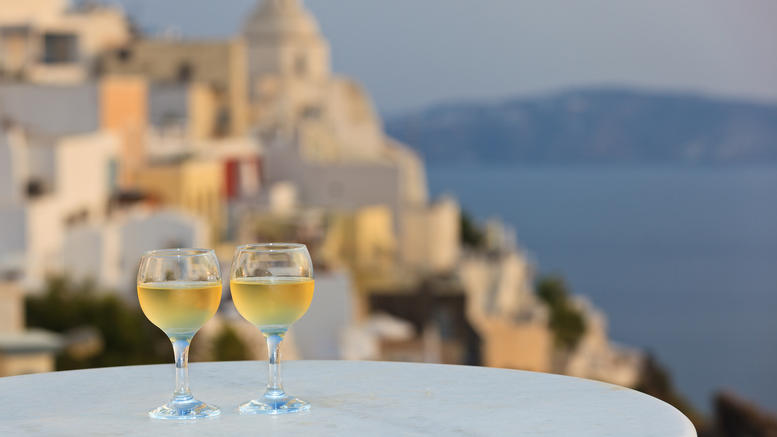 By Giles Milton For The Mail On Sunday

I must have been about ten when we went on a family holiday to Santorini. The airport was an old concrete shack, and tourists were still a novelty. Greece’s most seductive island was as Greek as a glass of cheap retsina.
Indeed, retsina was everywhere back then.

When my father ordered wine to go with his dinner and was given the local resinous plonk, he sent it back, saying it tasted strange. The restaurant owner politely informed him that Greek wines were meant to taste strange.

What a difference 40 years has made. Santorini, along with its glittering sister islands in the Cyclades, has completely reinvented itself.

These craggy volcanic outcrops are in the throes of a gastro-revolution, one that’s producing a slate of high-quality Aegean wines. They’re so good that they’re winning medals on the international stage and plaudits from Hollywood superstars.

Just a few months ago, the wine-loving actor Robert De Niro pitched up here with a picture of a Santorini wine label on his mobile phone.

‘I want that one,’ he said, pointing to a white assyrtiko, one of the finest local grape varieties to be awarded ‘protected origin’ status.

According to the winemaker who tells me the story, the restaurant had only one bottle left, so ‘the owner had a frantic run around town in search of more’.

The international jet-set have fallen for Santorini in recent years and it’s not difficult to see why.

The island is the beauty queen of the Cyclades, a majestic fractured volcano whose vertiginous cliffs are topped with whitewashed houses, most famously seen at the village of Oia.

Santorini is also home to more than a dozen wineries, each producing elegant vintages from vineyards planted a century ago.

But it’s not just wine that’s being showcased. A micro-brewery produces nectar-coloured beer, while food, too, has been swept up in the revolution.

There are goats’ cheeses and hand-crafted charcuterie to admire.

A short drive takes me to the organic farm of Yiannis Nomikos, who grows local ingredients that include pickled caper leaves (addictively delicious), white aubergines, and a tomato paste so rich and thick that I find myself lapping it up by the spoonful.

These ingredients are the raw materials used by local master-chef Dimitris Papadimitriou, who performs culinary alchemy in the kitchens of Aressana, Santorini’s finest hotel.

As I sit on the restaurant’s terrace, a succession of platters is unveiled: carpaccio of sea bass, smoked red pepper coulis, and cod and shrimp linguine. There’s grilled octopus, shrimp with feta, and a delicate potato puree served with seafood.

Although Santorini has become the shop window for the new cuisine, I’ve been given a valuable tip. ‘Go to Tinos island,’ says a local guide with a knowing wink. ‘It’s where the food is born.’

With this in mind, I take the inter-island Sea Jet, a catamaran that cuts through the Aegean at breakneck speed.

After brief stops at Ios and Paros, we arrive in Tinos.

The dozy port is the first clue it is very different from Santorini: a little-visited backwater with a mountainous hinterland dotted with Byzantine villages, all stacked up against the rocky cliffs.

The villages, I decide, will have to wait. Food is my mission and I head straight to Marathia restaurant, where Marinos Souranis has turned his beach bar into a gastro-heaven.

He is sourcing the finest local products – black sea bream, lobsters and fennel – and transforming them into dishes so scrumptious you’ll want to eat your way through the entire menu.

Marinos is only able to create such high-end cuisine because of the local producers. I’m taken to meet Yiannis, who lives high on the slopes of Mount Kehrovouni. He originally trained as a civil engineer but he’s reinvented himself as cheesemaker, producing varieties so good that they’ve made it on to the menus of Greece’s finest restaurants.
Another Yiannis, whose culinary workshop is next to the harbour, is the most celebrated producer of louza, a speciality pork loin that’s flavoured in a red-wine marinade before being dry-cured for 40 days.

The views from the upper slopes are breathtaking: the entire Aegean is spread out before me like a liquid carpet
And then there’s Alexandros Kouris, a former businessman who set up a micro-brewery called Nissos: it’s brewing beer so delicious that his pilsner has become the first Greek beer to win the coveted European Beer Star.

The views from the upper slopes are breathtaking: the entire Aegean is spread out before me like a liquid carpet.

Here on the summit of Mount Tsiknias are the vines of T-Oinos winery. The vintages they produce in this granite-strewn terrain are so clean and packed with minerals that they’ve made it into such esteemed hotels as the
Dorchester in London, the Plaza Athenee in Paris, and Monaco’s Louis XV.

You can see neighbouring Paros from the top of Tinos – it’s just over an hour away by ferry – but the two islands are chalk and cheese. Paros feels richer and attracts visitors so glamorous that the entire island feels like a beauty contest.

But scratch at the surface and you find the same love of terroir (the French expression for home-grown quality) that is the new buzzword of the Cyclades.

Like Tinos, Paros has vineyards and vegetable plots. It also has fishermen aplenty, who spend their mornings thwacking newly caught octopus against the harbour’s flagstones in order to tenderise the meat.

The best place to sample the local seafood is the old port, where restaurants like Barbarossa serve grouper in a lettuce sauce. Sounds unappealing?

It tastes like heaven, especially when washed down with a barrel-aged assyrtiko wine the colour of honey.

If my father had ordered this, rather than retsina, he certainly wouldn’t have sent it back
Back on Santorini, I chat with Yannis Valambous, a former financier in his mid-30s who quit his job in London to establish a high-end winery.

‘Greece needs more enterprising people,’ he says. ‘I read about assyrtiko being the new hot grape and decided to act.’

After an investment of £1.5million, his Vassaltis winery has started producing superb wines.

I wind down my evening at Domaine Sigalas, where Panayiota Kalogeropoulou (try saying that after a few glasses) pours me world-class wine.

Sigalas has a terrace bar, great nibbles and a reputation for hospitality. This is a place to watch the sun slump slowly into the Aegean while slugging a glass of rich, late-vintage nychteri.
If my father had ordered this, rather than retsina, he certainly wouldn’t have sent it back.