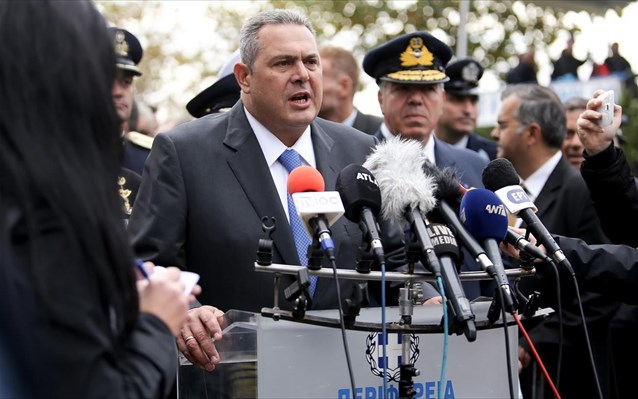 Defence Minister Panos Kammenos on Thursday warned Turkey to “stop playing games with Greece,” in a statement read out to reporters after the NATO defence ministers’ meeting in Brussels.

“Today, early in the morning, I had the opportunity to meet and talk for some time with U.S. Secretary of Defense Gen. Jim Mattis and NATO Secretary-General Jens Stoltenberg, whom I spoke to about Turkey’s latest provocative behaviour in the Aegean and in the vicinity of the Imia islets, the Greek islets within Greek territorial waters.

“I had the opportunity to show them material proof that contradicts all Turkish claims that it was supposedly an accident or just grumbling by Greece.

“Turkey is provoking, violating Greek and European territorial waters, proceeding with acts that violate every aspect of the law of the sea and coming very close to an ‘accident’ in the Aegean,” Kammenos underlined.

Turkey bore full responsibility, he added, while stressing that a country within NATO was simply not permitted to dispute the territory of another member-state of the Alliance.

“The Imia islets are Greek islets; this is absolutely clear in all the treaties that Turkey itself has signed. It cannot, therefore, continue this game: on the one hand the bravado, the statements by so-called Erdogan advisors and the provocative behaviour in the Aegean that is later blamed on some ship captains; while on the other hand, diplomatically, Turkey saying that there is nothing going on, that it was an accident,” Kammenos stressed.

While Greece is a peaceful country, the minister added, it will never tolerate provocations that violate its national sovereignty or even verbally question this sovereignty in any way. Greece’s NATO allies, the United States and all the countries of the European Union have been informed about the developments, Kammenos said, while Greece will continue to brief its EU partners and the countries of the South East Mediterranean about Turkey’s behaviour ahead of the Munich summit.

“Turkey must finally accept that it cannot play games with Greece by handling things in this manner, with naval and verbal [provocations] on the one hand and diplomatic backpedalling on the other hand. We will no longer tolerate such behaviour by Turkey,” he concluded.