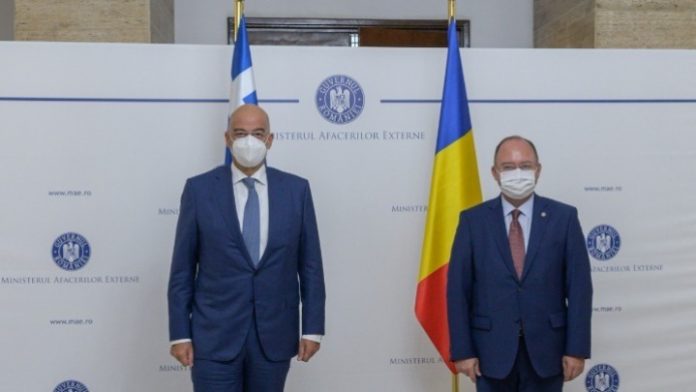 “A major challenge we share is the risk that some countries may try to instrumentalize migratory flows. We have witnessed this pattern several times in the past. And I am going to say clearly, to everybody, we will not allow this to reoccur,” Foreign Minister Nikos Dendias said on Wednesday in joint statements with his Romanian counterpart Bogdan Aurescu after their meeting in Bucharest.
“We, the EU countries in the wider region, have a primary responsibility and direct interest to push forward the integration process of the Western Balkans. Of course, in full respect of the set conditionalities,” he said and added: “We need to avoid, and we agree on that, the creation of a black hole in the Western Balkans.”
“Unless the EU feels the vacuum, others, that do not share the same principles, as Romania and Greece share, will try to fill it. Countries that support radical ideas, extremist movements,” he noted.
Dendias underlined that “we need to continue building a community of values and principles. Based on respect of International Law and in particular the Law of the Sea, in which this Ministry has a very proud tradition.”
The Greek Foreign Minister stressed that Greece is a NATO Ally for almost seven decades. “We continue to show our unmitigated solidarity to the Alliance in which we belong. And contrary to other Allies, we do not undermine the cohesion of the Alliance from within. Through destabilizing actions, by advanced weapons purchase or by behavior that is contrary to the values and the principles of the NATO Alliance.”
Dendias stated that “our diplomatic relations span more than 14 decades, 140 years. And it will be a great honour to address the annual gathering of Romanian Ambassadors. And it will be a great honour to be received by President Iohannis later in the day.”
He also referred to Greeks living in Romania, as well as Romanians living in Greece, who contribute to further advancing ties between the two peoples. “Eleusina and Timișoara will soon be the European capitals of Culture. Bilateral trade last year, despite the pandemic, reached almost two billion euros. Greek investments in Romania are approximately 3.5 billion euros. And Greece is one of the favourite destinations for Romanian tourists.”
“We have to work more to further enhance our interconnectivity. In transport, through the Via Carpatia. In the energy sector. In all sectors. This will be beneficial for all the countries of the region, including our other EU partners. We are working together in regional schemes, such as the Black Sea Economic Cooperation and the South-East European Cooperation Process,” Dendias stressed.