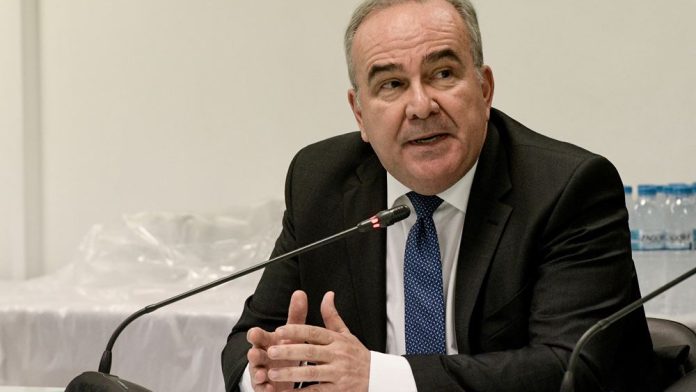 Deputy Minister of Development and Investment Nikos Papathanasis spoke about the incentives for attracting investments, speaking at the Delphi Economic Forum in Washington.

The Deputy Minister of Development and Investment,  Group managing director of AXIA Ventures Mr. Antonis Achilleoudis, and Deputy Assistant Secretary, Bureau of European and Eurasian Affairs at the US State Department Ms. Erika Olson, discussed how Greece can become more resilient. The discussion took place in the context of the 3rd Conference on South-Eastern Europe and the Eastern Mediterranean, co-organized by the Delphi Economic Forum and the Hellenic-American Leadership Council, in Washington.

During the discussion, which was moderated by the Executive Director of the Hellenic-American Leadership Council, Mr. Endy Zemenides, Mr. Papathanasis said that Greece offers many investment opportunities for American and European companies. “During the financial crisis, there was no interest in investing in Greece. In the post-Covid-19 era, the country’s outlook has changed,” he said, noting that by strictly following European law, Greece has managed to become a friendly investment environment and this is evident from the interest of large US companies, such as Pfizer and Microsoft. “Greece has made great strides in reducing bureaucracy, increasing investment interest, but also in the return of specialized scientists to our country who left during the crisis (reverse brain drain). Legislation on faster licensing procedures for companies has created a friendly, comfortable investment environment that attracts foreign investors,” he said. Speaking about tourism, he said that “American tourists are in demand for the Greek tourist market and especially for Attica. Further interconnection with direct flights from the US to Greece is an important step in increasing tourism.”

Mr. Achilleoudis said he was optimistic about the future of Greece. “Greece offers many opportunities that did not exist before. Less bureaucracy and efforts to simplify procedures have made Greece an attractive destination for investment.” For the tourism sector, Mr. Achilleoudis noted that Americans are looking for services that meet the money they spend. This is now found in the Greek market, which has upgraded the tourist product it offers.

Ms. Olson spoke about the changes that have taken place in Greece and especially after the privatization of the port of Piraeus. “Greece is now a country that attracts investments from all over the world and the USA. “The privatization of the port of Piraeus has created multiplier benefits for American companies,” he said. Regarding tourism, Ms. Olson stressed that the 14 direct flights to 8 Greek airports during the summer season as well as the US-Greece Cooperation Memorandum help a lot in attracting American tourists to Greece. “Americans love Greece, what must happen is that there is a corresponding positive narrative that accompanies the country’s efforts,” she added.