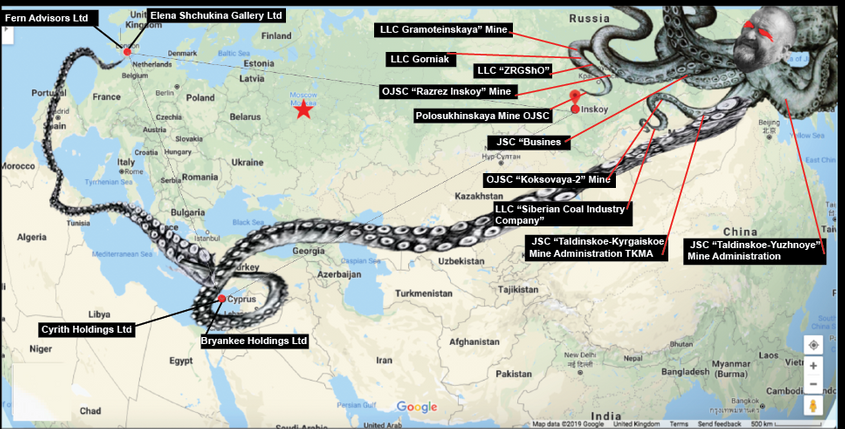 Cyprus’s name was repeatedly heard at anextraordinary event held on 29 April at the British Parliament. The subject of the discussion was the notorious case of Russian magnate,Alexander Shchukin. British Conservative MP Sir Henry Bellingham and Lord Timothy Razzallorganised the event.

Shchukin, who is also called the king of coal, has been accused oftaking over mines with disputed methods on many occasions. The latest casefor which he was put on the dock along with seven other people, concerns charges of extortion for the control of the Inskoy coalmine. For this specific case, the businessman is under a two-year house arrest.

His name was also implicated in the 2016 case of disappearance/murder of the bankruptcy supervisor of the Koksovaya-2 coalmine,Yevgeny Lazarevich when the latter’s family had accused the Russian mogul. The newspaper Kommersant recently published an extensive report on the matter, as well as the statement of his sister Anna, who is openly accusing Shchukin of being behind the disappearance/murder of her brother. Shchukin is considered to be one of the main shareholders of the biggest coal supply group in Russia. His net worth is estimated at around $400m and at some point,he was even ranked 56thon the Forbes list with the richest people in the world. It appears that his family holds assets in the UK, Monaco and Cyprus, while information has frequentlysurfaced linking Cyprus to the darktransfers of illicit money from Russia to London.

During the discussion at the UK Parliament, a number of questions were raised on the role that the Cypriot authorities can play, so as to shed light onpotentialcases of money laundering by Russian oligarchs before the money ends up in the UK through offshore companies registered in Cyprus.Similar questions were also raised about the willingness of the Russian authorities to cooperate with the Cypriot and British authorities in order to shed light on the Shchukin case. They particularly stressed that this is not a political issue anymore but an investigation into adisappearance/homicide. Furthermore, they also referred to a specific case that Cyprus was involved in, which concerned the transfer of €15m from the coalmine headed by Shchukin to a Cyprus-registered company. As it was mentioned,around €100m was transferred from Shchukin’s funds to Cyprus, according to the investigations of Russian journalists.

Representatives of Russian coalminers also attended the event. They are currently raising funds through a crowd-funding campaign and promoting a petition urging the Russian and British authorities to investigate the conditions under which theKoksovaya-2 coalmine was overtaken, as well as to find out who is behind the disappearance/murder of Yevgeny Lazarevich.

YevgenyLazarevich’s sister Anna also attended and spoke at the event. In her speech, Lazarevich claimed that Shchukin is behind her brother’s disappearance, in his effort to control the coalmine. She also put forward the position that the Russian businessman is being backed by corrupted local officials.

More information on the Shchukin case can be found on the website http://www.bloodcoalmoney.com, while a map showing the suspicious money transfers from Russia to the UK through offshore companies was posted onhttp://bloodcoalmoney.com/the-octopus-11.html, with references to specific companies.

It should be noted that the online version of the Telegraph also reported on the Shchukin case, publishing the statements of Elena Shchukina, Shchukin’s daughter, owner of an art gallery in London. She said that after Alexander Shchukin’s prosecution for the Inskoy case, she received death threats. As the press report says, the police forces of the UK, Monaco and Cyprus were also informed about the death threats against Shchukin’s family, since the latter hold assets in these jurisdictions.

Of course, theInskoycoalminecaseisnottheonlyone thatgotShchukininvolvedinlegalbattles. He was previously taken to court when he was accusedof taking over coalmines. Occasionally, many international and Cypriot press reportsreferred to his business activities and the transfer of coalmines to Cypriot offshore companies.