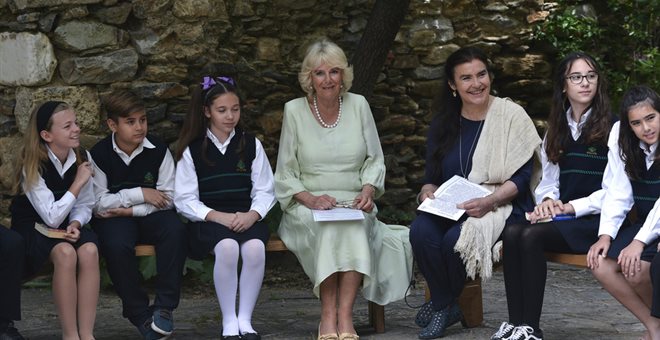 Camilla, the Duchess of Cornwall, paid a visit to the Kaisariani Monastery on the outskirts of Athens on Thursday, where she was received and shown around the monastery by Culture Minister Lydia Koniordou. The Duchess of Cornwall and her husband Prince Charles are currently on a three-day official visit to Greece.

During the visit, the Duchess also took part in educational activities with a school trip visiting the site, during which she read excerpts from the children’s book “Harry Potter and the Philosopher’s Stone” in English, selecting a scene from Chapter Six where Harry Potter arrives at Platform 9 and 3/4 to catch the train for Hogwarts School of Witchcraft and Wizardry.

The same excerpt was then read out in Greek by Koniordou and finally acted out as a theatrical scene by the school children, who were enthusiastically applauded by the visiting royal. Afterward, the children presented the Duchess with a painting as a gift.

The activity was organised to mark Athens’ stint as UNESCO World Book Capital 2018, while it was also a nod to the ancient school of philosophy that once stood near the site where the 11th-12th century monastery was built, on the ruins of an ancient temple. The school of philosophy was disbanded by order of the Emperor Justinian in 529 AD, while the ancient temple was converted into an Orthodox Christian monastery in the 7th century.