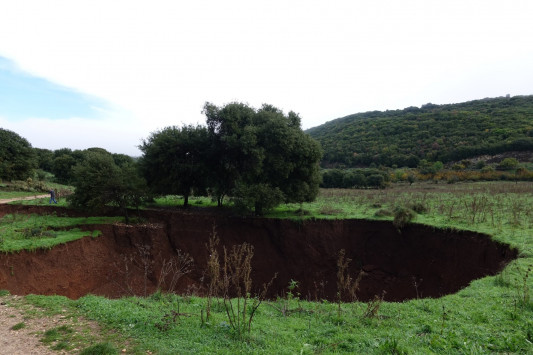 A 200-square-meter sinkhole appeared on Saturday morning in the rural area of Kalpaki, 30 kilometers west of the city of Ioannina in western Greece, which the fire department estimates to be about 20 meters deep.

The area which caved in, is right next to a pen and a rural road but luckily nobody was injured, authorities said. According to the first indications, the sinkhole was caused by continuing seismic activity in the area and the landslides are expected to continue. People from the surrounding areas who came to see the crater said they had never seen such a geological phenomenon before.

Kalpaki mayor Kostas Kapsalis told the Athens-Macedonian News Agency (ANA) that a team of specialists from the Institute of Geology and Mineral Exploration are expected to arrive at the village to inspect the crater.