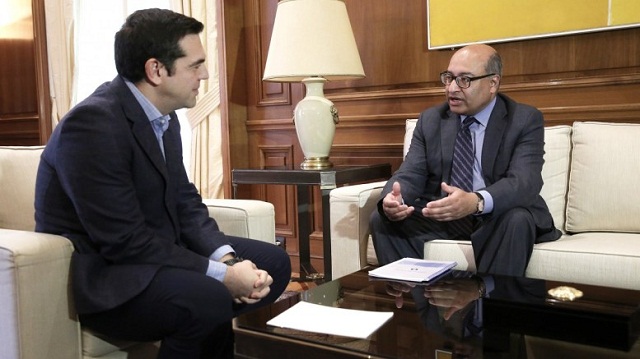 Prime Minister Alexis Tsipras on Tuesday had a meeting with the President of the European Bank for Reconstruction and Development (EBRD), Sir Suma Chakrabarti, at the Maximos mansion. The two officials discussed Greece’s economic recovery as well as EBRD investments.

According to a press release from the prime minister press office, Tsipras referred to Greece’s economic recovery and the aim of speeding up growth, with emphasis on the small and medium-sized enterprises.

Moreover, the prime minister referred to the benefits of EBRD activity in the country for the Greek economy and expressed his certainty that its presence will further contribute to the acceleration of growth.

On his part, Chakrabarti congratulated the government for the country’s economic recovery and the increase of employment, expressing the EBRD’s intention to continue its support.

According to the announcement, the bank will expand its activity into new sectors, including SMEs, tourism, real estate, renewable resources, agronutrition and investments to improve municipal services, up until 2025.

Greece is the fifth EBRD investment destination, of up to 2.5 bln euros, when up to 600 million euro investments expected within 2018.

The EBRD president announced his intention to open an EBRD office for SMEs in Thessaloniki.