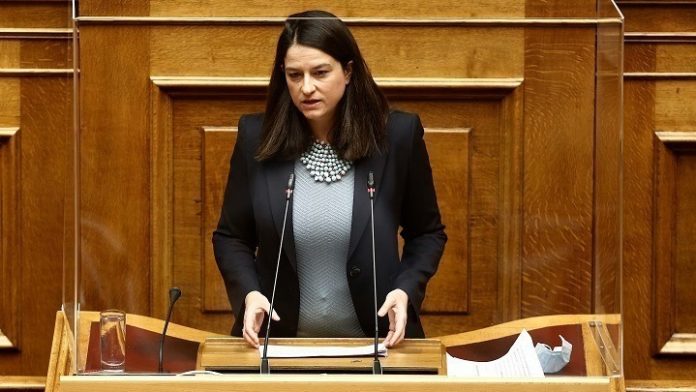 Education Minister Niki Kerameus on Wednesday roundly rejected a proposal that she stop the debate and vote of her ministry’s draft bill in parliament, made by main opposition SYRIZA-Progressive Alliance leader Alexis Tsipras, saying that this concealed an attempt by Tsipras to “take back” his own controversial statement on television that he “accepted” the epidemiological risk for those participating in planned protest rallies opposing her legislation.

“We state unequivocally on the part of the government: the debate in parliament will not stop so that there is a stop to the discussion of this unprecedented statement by the main opposition leader,” she said, accusing SYRIZA of “protesting without observing minimum distances in the morning and turning up to denounce the rise in cases in the afternoon.”
She also denied trying to pass the bill without adequate consultation and pointed out that the parliamentary debate was given the maximum time allowed, with 150 MPs scheduled to speak.

“The main opposition’s proposal is clear: we should lock up parliament as long as the pandemic lasts, not legislate, not take the country forward, just wait. It is the same logic that calls for the locking up of schools from the first day of the pandemic until the last,” Kerameus added.

She also refuted that university rectors opposed the draft law, saying that they while they might not all agree on the proposed solution, they did agree with a minimum pass mark for admission and a smaller number of choices in the applications form, as well as with controlled access to universities, while all admitted that there was a serious problem with lawlessness on campuses. She also claimed that opposition to the bill was mainly restricted to the SYRIZA party, while support among the party’s voters was much higher, even for the proposed campus police.

Finally, Kerameus questioned the main opposition leader’s estimate that there would be 24,000 fewer students admitted to universities as a result of the changes, noting that this would depend not only on their results but also on the minimum pass marks set by the universities themselves.