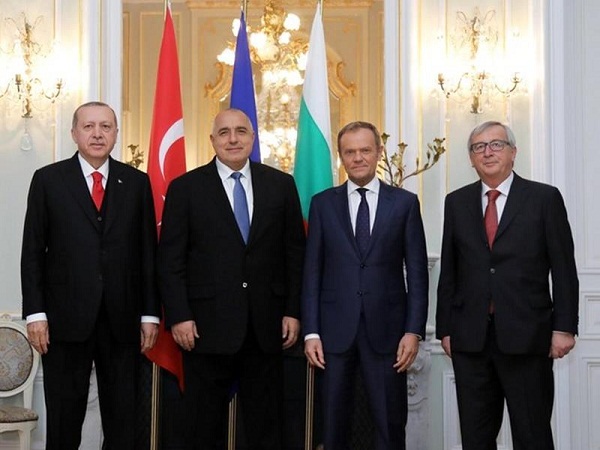 Turkey’s relations with Greece and Cyprus were discussed at the Euro-Turkish summit in Varna, as Turkish President Recep Tayyip Erdogan said during a conversation he had on the plane with the journalists accompanying him, according to the newspaper Hurriyet.

“We found an opportunity to discuss them in detail. The issue of the two Greek soldiers who crossed the border and got arrested because they entered a forbidden military area was discussed. I explained to them that the matter has been referred to justice and that the families and the consular staff visit them. They told me: “You are a great country, yourself a big leader, so make sure they get released.” And I replied: “I’m not bigger than Justice, the matter is in Justice’s hands, we have to wait for the decision,” according to the Turkish newspaper.

However, he said that he explained to the other leaders that “it is not consistent with justice (to have) those who insist so much on the issue of the two (Greek) soldiers avoid any reference to the issue of extradition of the Turkish servicemen, who were involved in the coup and then fled to Greece.”

“Of course,” he added, “we are not linking the two issues. But those who carried out a coup in our country are still in Greece. Despite our request, they did not return them to us. Yet those who have said nothing about this issue are now saying that the two Greek soldiers must be immediately released.”