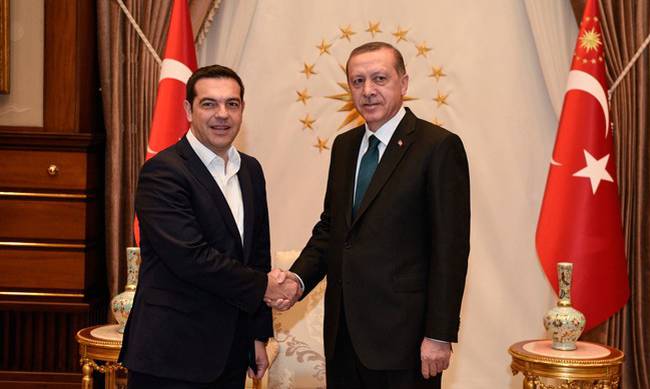 The first visit by a Turkish president to Greece in decades was a chance for the two countries to “take bold steps forward,” Greek Prime Minister Alexis Tsipras said in an exclusive interview with Anadolu news agency on Wednesday, just hours before Turkish President Recep Tayyip Erdogan’s scheduled arrival in Athens.

As well as outlining the agenda to be discussed during Erdogan’s visit, Tsipras also talked about the EU-Turkey agreement on refugees and the case of the eight ex-soldiers who fled Turkey after the failed coup. Talking about the eight, who are now claiming asylum in Greece, he pointed out that the case was currently before Greek justice and declined to comment on its decisions:

“It is independent from the executive and its decisions on individual cases are, of course, fully respected,” he said. “From that point on, my position has always been absolutely clear that coup-plotters are not welcome in Greece.”

“In this context we are continuing our security and judicial cooperation,” he added.

Talking about bilateral relations, Tsipras pointed out that Greece and Turkey were located at the ‘crossroads’ of three continents and had to be in a position to face both the challenges presented by the current period – relating to regional stability, security, migration and the economy – but also the opportunities arising from this position.

“Firstly, we must develop our positive agenda on migration cooperation, the economy and people-to-people contacts,” Tsipras said. “The EU-Turkey Agreement on migration as well as our bilateral Readmission Protocol must continue to be implemented as effectively as possible,” he added.

The Greek premier said the two countries had a series of important projects ahead relating to transport networks, energy, trade, culture and tourism. He reported rapid progress on the TAP-TANAP pipeline and referred to natural gas projects currently being discussed by the two sides. He also noted that a ferry link between Thessaloniki and Izmir will soon be possible, as well as a resumption of the rail link between Thessaloniki and Istanbul and other transport projects.

Tsipras said that the two countries’ bilateral relations “must develop on the basis of solid foundations of mutual respect, international law and full respect [for the] Treaty of Lausanne”.

“We need to make sure that the Aegean and the Mediterranean are seas of peace and dialogue and not of tension or confrontation,” he added.

“It is high time that we revitalise our discussions on Confidence Building Measures and the Exploratory Talks,” Tsipras said regarding the airspace violations by Turkish planes over the Aegean.

Tsipras also said it was important that Turkey and Greece “send a message of support on the restarting of the talks for a just and viable solution in Cyprus, on the basis of UN Resolutions.”

Talking about the migration crisis, Tsipras said this proved the importance of both bilateral cooperation and EU-Turkey cooperation. He also noted that Athens was closely following the Astana initiative for peace in Syria, in which Turkey played an active role.

Asked about bilateral relations between Turkey and Greece, Tsipras said: “We have faced challenges and difficult moments in our relations. But we should be guided by the increasing support that our peoples show to each other in difficult times, such as natural disasters, the Greek economic crisis, terrorist attacks, or the heinous military coup attempt in Turkey.”

Asked about the rise of far-right forces in Europe, Tsipras said this was “very disturbing” but noted
that the best response to the forces showing racism and Islamophobia “came from the people of Greece during the refugee crisis.”

“Like the Turkish people, the Greek people proved their solidarity and hospitality, despite the difficulties they face in their everyday lives,” he added.

“The challenges of migration and security make it even more important to preserve the EU-Turkey relationship as a mutually beneficial one,” Tsipras said.

The Greek premier also highlighted the importance of Turkey’s EU accession and EU-Turkey dialogue, however, as a process contributing to “preserving and promoting crucial democratic reforms and good neighbourly relations.”

“We live side by side. As Greeks, we will always support democracy in Turkey and a Turkey that looks to Europe. I believe the EU must be clear in its positions and its commitments and Turkey must find its way in this direction, after a very challenging period,” he said.

With respect to the EU-Turkey agreement on migration, Tsipras said this was a difficult but necessary initiative, especially after the unilateral closinb of the Balkan corridor on Greece’s northern border.

“Turkey has shown its commitment in fulfilling [the agreement] and rapidly decreasing migration flows in the Aegean,” he said.

“Nevertheless, the situation in the islands of the Eastern Aegean remains difficult. I will be discussing its implementation with President Erdogan as well as EU leaders.”

The Greek premier noted the need for a system for managing refugee flows with solidarity, which established a mechanism of returns and resettlement and provided support to the countries on the front lines.

Tsipras also talked about possible Turkish investments, noting that Greece was “leaving the crisis behind” and embarking on a new phase of growth, completing its economic programme in the summer. He pointed to an increasing number of successful investment projects taking place in Greece, while noting that a number of Turkish investors were looking into the opportunities opening up in real estate, shipping, tourism, infrastructure and energy.

“We will discuss our bilateral economic relations with President Erdogan, especially in light of the High-level Cooperation Council in Thessaloniki in February and, possibly, a joint business forum,” he said.

Erdogan is scheduled to arrive in Athens for a two-day visit on Thursday, spending one day in the Greek capital and visiting the northern Greek region of Komotini on Friday.