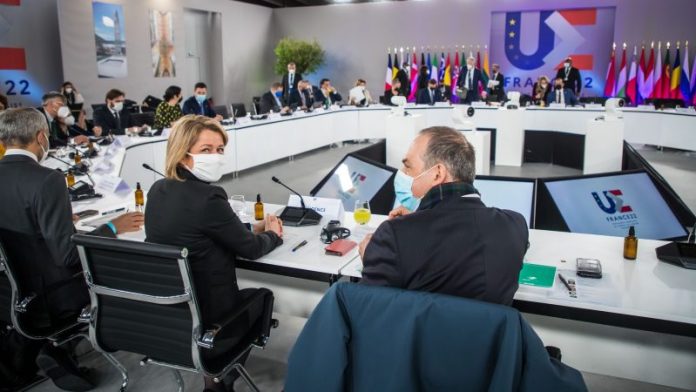 European Union environment ministers gathered in France Thursday (20 January) to mull climate policy and the merits of a carbon border tax, while airing differences on whether nuclear energy can be classified as “green”.

The two-day informal talks in Amiens, hosted by France as it takes the rotating reins of the EU presidency, will look for a unified path toward achieving the 27-nation bloc’s ambitious target of slashing carbon emissions 55% from 1990 levels.

EU energy ministers will join the fray on Friday, and then continue on with separate talks.

Since last year, French President Emmanuel Macron has led the charge for the rapid implementation of a “carbon border adjustment mechanism”, essentially a tax on imported products made in countries with less stringent rules on reducing carbon pollution.

The objective is to avoid shifting Europe’s carbon emissions overseas as they are reduced at home – known as “carbon leakage”.

The sectors affected include steel, alumium, cement, fertiliser and electricity.

China is opposed to such a tax, with Beijing saying last year when the plan was unveiled that it would “violate World Trade Organisation (WTO) principles.”

Even within Europe, Germany insists the mechanism can only be implemented gradually, and several countries are outright opposed, mainly because the tax would replace the allocation of free emissions permits.

Such a carbon tax “raises complicated questions,” he added. “Who collects the money? Where does it go?”

But France’s ecological transition minister Barbara Pompili said that there is already an “agreement in principle”, and talks have shifted to questions of timing.

After EU ministers hammer out a consensus on “CBAM”, as it is known, they will undertake negotiations with the EU Parliament to finalise an agreement.

Another divisive issue that has pitted Paris against Berlin is whether nuclear power’s virtue as a source of carbon-free energy outweighs safety issues and the as-yet unsolved problem of nuclear waste.

A greater share of electricity in France – about 70% – is generated by nuclear power than any other country in the world.

The question on the table is whether nuclear power and natural gas should be officially classified in the “EU taxonomy” as environmentally sustainable, an important signal to companies, investors and policymakers.

A leaked Commission proposal, circulated on 31 December, proposes to label nuclear and gas as “transitional” technologies in the EU’s effort to reach net-zero emissions by 2050.

Nuclear power is neither “sustainable” nor “economic”, Germany environment minister Stefan Tidow said in Amiens. “It is not a green energy.”

Pompili did not disagree, acknowledging that storage of spent nuclear fuel remains a major problem.

But “nuclear is a decarbonised energy,” she said. “We cannot deprive ourselves of it at the same time that we need to very rapidly reduce our carbon emissions.”

On Thursday, a group of four EU countries comprising Austria, Spain, Luxembourg and the Netherlands issued a joint letter to voice their “deep concerns” about the proposal, saying the EU’s draft green label for gas and nuclear “puts the energy transition in the EU and globally at risk”.

“This draft sends a wrong signal to financial markets and seriously risks being rejected by investors,” they warn. “Given the long lifespan of both nuclear energy and natural gas facilities, an inclusion in the taxonomy risks to lead to a technological lock-in for many decades and divert investments away from renewables,” they add.

A third initiative favoured by France is developing tools to fight so-called “imported deforestation,” stemming from products indirectly responsible for the destruction of tropical forests.

A draft law submitted by the European Commission in November is currently under discussion in the bloc’s Parliament.

Environmental NGOs said the text has too many loopholes, excluding commodities such as corn and rubber.

Yet another initiative running into stiff headwinds is a measure to expand the cap-and-trade system of carbon pollution quotas – which currently covers heavy industry and the electricity sector – to transport fuel for trucks and domestic heating fuel.

The controversial proposal, championed by the European Commission, has found scant support among ministers, concerned the measure would result in unpopular price hikes for consumers.

France has expressed “strong reservations,” according to a French official.

“We saw the rise of the ‘yellow vests’,” he said, referring to popular protests in 2018 sparked by a modest increase in petrol prices.