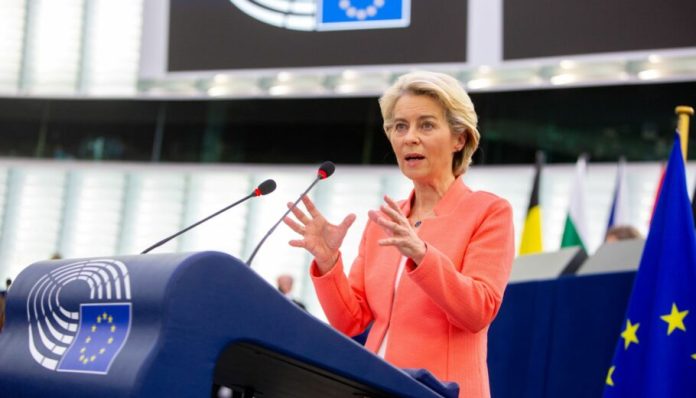 The European Union’s chief executive on Wednesday proposed a phased oil embargo on Russia over its war in Ukraine, as well as sanctioning Russia’s top bank and banning Russian broadcasters from European airwaves, in a bid to deepen Moscow’s isolation.

The plan, if agreed by EU governments, would mark a watershed for the world’s largest trading bloc, which is dependent on Russian energy and must find alternative supplies.

But Russia’s invasion of Ukraine by land, sea and air on Feb. 24, the renewed Russian offensive in eastern Ukraine and the horrific images of slaughter in Ukrainian towns have overcome reluctance to deliver the toughest sanctions so far.

“This will be a complete import ban on all Russia,” she said to applause in the chamber.

The Commission’s measures include phasing out supplies of Russian crude oil within six months and refined products by the end of 2022, von der Leyen said. She pledged to minimise the impact on European economies.

“We are addressing our dependency on Russian oil. And let’s be clear, it will not be easy because some member states are strongly dependent on Russian oil, but we simply have to do it,” she said.

“(Russian President Vladimir)Putin must pay a price, a high price, for his brutal aggression,” she said.

As well as oil, the latest round of sanctions will hit Sberbank SBER.MM, Russia’s top lender, as well as three other banks, adding it to several banks that have already been excluded from the SWIFT messaging system.

“We de-SWIFT Sberbank – by far Russia’s largest bank, and two other major banks. By that, we hit banks that are systemically critical to the Russian financial system and Putin’s ability to wage destruction,” von der Leyen said.

“This will solidify the complete isolation of the Russian financial sector from the global system,” she said.

Von der Leyen said more high-ranking Russian military officials would face EU asset freezes and travel bans, without giving names. “You are not getting away with this,” she said, referring to the Kremlin.

The proposals by the Commission now need to go to the 27 member states for approval. Diplomats said there was likely to be a longer period granted to Hungary and Slovakia to stop oil imports as they are so heavily dependent on Russian energy.

“In the short term it might leave Russian revenues high while implying negative consequences for the EU and global economy in terms of higher prices,” he said. “Not to talk about retaliation risks on natural gas supplies.”