There will be no solution to the migration issue at all if European countries do not come up with one, European Commission First Vice President Frans Timmermans said in the plenary session of the European Parliament in Strasbourg on Wednesday, ahead of the EU leaders’ thematic debate on migration to be held on Thursday.

Timmermans defended the Commission’s position as expressed by Migration Commissioner Dimitris Avramopoulos on Tuesday and said that solidarity is a basic component of the EU. He rejected claims that the resettlement of refugees during the crisis was ineffective, pointing out that over 32,000 people had been settled in EU countries.

Only a solution to Dublin can provide a solution to the Schengen agreemenet, he said. A small number of countries cannot be made to carry the burden of the migration issue, he noted. 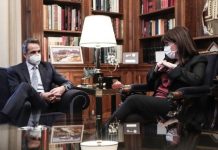 Mitsotakis: Τhe current difficulties surrounding the delivery of the vaccines will be temporary