This information comes from recently published data on general government expenditure. The article presents only a handful of findings from the more detailed set of Statistics Explained articles. 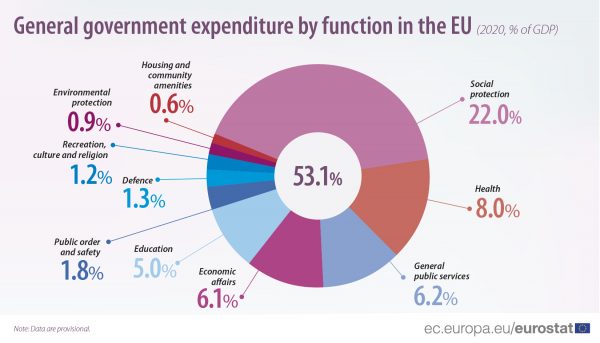 At EU level, general government total expenditure increased for all the major functions, but increases were concentrated in ‘social protection’ (+€238 billion, of which +€118 billion were for ‘unemployment’), ‘economic affairs’ (+€206 billion) and ‘health’ (+€95 billion).

Ratio of social protection expenditure highest in France and Finland, lowest in Ireland 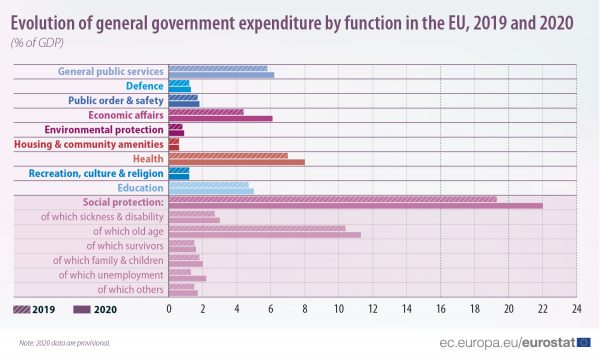 Government expenditure on health highest in Czechia and Austria, on education highest in Sweden, on economic affairs highest in Croatia

In 2020, Czechia and Austria (both 9.2%) and France (9.0%) recorded the highest ratios of government expenditure to GDP devoted to health among EU Member States.

The highest ratios of government expenditure to GDP on general public services were observed in Italy (8.7%), Greece and Finland (both 8.4%).

For education, the highest shares were registered in Sweden (7.2%).

Greece spends slightly more than the European average for social protection, 22.5%. Economic affairs is the next category of expenditures with a rate of 9.9% i, ie 3.8 points above the EU average, followed by public services at 8.4%.

For health, the state spends 6.7% of its outlays, well below the European average, and for education 4.5%. The share of defense in public spending is twice the EU average at 2.6%, followed by civil protection with 2.4% (compared to 1.8% on average in the EU), environmental protection, almost twice as much as the European average, at 1.6% and local infrastructure at just 0.3% of the total.