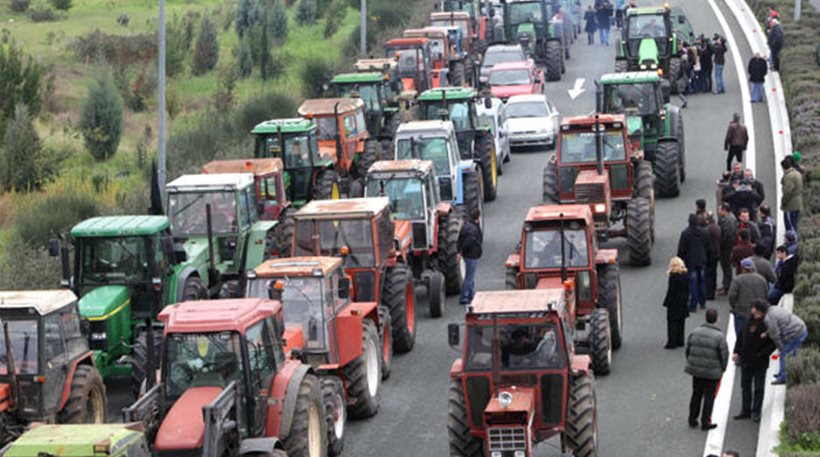 Farmers protesting against planned pension system reforms on Wednesday carried out a brief half-hour blockade of the customs office in Promahonas, at the border crossing from northern Greece into Bulgaria. According to their trade union representative Stelios Nikitopoulos, the same protest action later in the day should not be ruled out.
Tractor convoys had earlier blocked roads at Koboti in Arta and the centre of Ioannina in northwestern Greece but the roads were opened by the afternoon. Protesting farmers intend to return to Ioannina without their tractors at 18:00 for a rally, while a rally is being organised in Arta on Saturday morning.

Agricultural associations in Thesprotia and Preveza are also preparing to launch protests in the next days.
Riot police and farmers earlier clashed outside the Rodopi Regional Authority building in Komotini, where Rural Development and Food Minister Evangelos Apostolou was meeting a farmers’ delegation from Rodopi and Evros, resulting in use of tear gas.

Meanwhile, hundreds of Larisa farmers turned out in protest in Thessaly, with a tractor convoy heading toward the pass in Tempi. By order of the police, the Athens-Thessaloniki national highway was closed to traffic from noon, from the Gyrtoni junction to the Stomio junction, so that the tractor convoy could reach its destination. Traffic was diverted onto alternative routes.

In Macedonia, farmers with 750 tractors threatened to block the Kerdyllia junction on the Egnatia highway “indefinitely” while those in Drama blocked the Kokkinogeia junction to Exohi.

Farmers with tractors also turned out to support a protest by fishermen in the city of Thessaloniki and protests were held in Crete, Fthiotida, the Peloponnese and other areas of the country.

A mini-government meeting with Labour Minister George Katrougalos on the farmers’ pension system issues was arranged at the Maximos Mansion on Wednesday.

Alternate Finance Minister Tryfon Alexiadis will also participate in the meeting.
According to sources, the Labour ministry is examining changes in the pension system for new farmers, as well as tax relief.