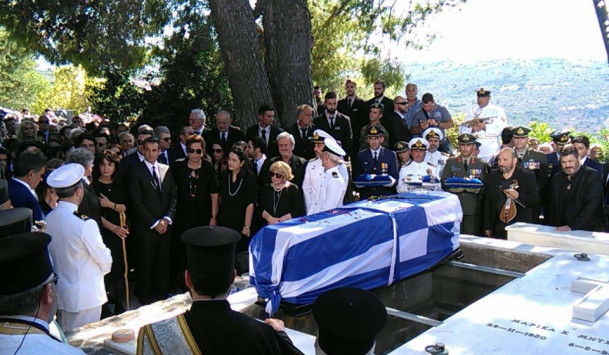 The late Greek statesman Constantine Mitsotakis was interred in his native Crete on Thursday, following a graveside service attended by his close family, friends and hundreds of mourners at the Argoulide cemetery in Akrotiri, near Chania.

The burial service was held on Thursday afternoon, after Mitsotakis’ body had lain in state at the Church of Aghia Magdalene overnight. The coffin containing his remains was then placed on a gun carriage and taken to the cemetery in a solemn procession through the streets, accompanied by a military honour guard and Cretans in traditional dress.

Mitsotakis was buried beside his wife Marika, in a deeply moving ceremony and blessing led by the Archbishop of Crete Irineos. At the graveside to bid a final farewell were the late stateman’s four children – main opposition New Democracy leader Kyriakos Mitsotakis, ND MP Dora Bakoyannis, Alexandra Mitsotakis Gourdain and Katerina Mitsotakis – as well as his many grandchildren.

A Navy military band played as the casket was lowered into the ground, while honour guards from all three branches of the Armed Forces presented arms and the 1st Paratroopers’ Squadron fired in salute for the former Greek prime minister, minister and honorary ND party president. Cretans wearing traditional mourning dress then sang his favourite ‘rizitika’ Cretan songs, followed by singers Manolis Kontaros and Nikos Zoidakis singing mantinades to the accompaniment of a Cretan lyra.

One of his grandchildren deposited a Cretan shepherd’s crook on the coffin and the national anthem was sung, after which an army officer presented the Greek flag that had covered the coffin to Kyriakos Mitsotakis and the late statesman’s medals to his daughter, Dora Bakoyannis.